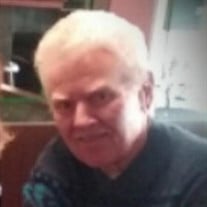 Taft, Albert “Terry” November 30, 2020 Age 80 of Westland. Loving husband, father and grandfather. Married to Ceceile for 57 years. Dad to three daughters, Shaun Taft, Shannon Taft and Stacey (Pat) Wilson. Grandfather of Austin (Marin Giovannini) Taylor, Joshua Taylor, S.S.gt. U.S Inf. and Meghan Taylor. Brother of Shaun (Jerry) Kaufka and Michael (Diane Eshemburg) Taft. Terry loved sports. He was a very gifted athlete and excelled in any sport he played. His early years included baseball and track. He held records at Garden City East High School in track and field that lasted for many years after he graduated. After graduation, he enlisted in the service as a M.P. and played on the Army’s football team. He was recruited by the farm teams for the Detroit Lions and the Detroit Tigers. When racquetball was big, he played that. He was a very skilled bowler and played on many leagues. He played on numerous softball teams and continued playing into his 70’s, only letting cancer treatment slow him down. Terry could play a round of golf either right or left-handed and won many tournaments. He started playing hockey when he turned 50 and played for 25 years. He took a lot of pride being an athlete and it brought him a lot of joy. He was raised in Garden City and moved to Westland in 1964. He was a very social guy and was well known in the area. He is fondly known as “Mister T” or “T” by folks out in the community. He gave back to those communities by coaching recreational sports and being a member of the Knights of Columbus and the Lions Club. His family wants to thank all of you for your love and support. The last few years have been difficult navigating cancer. It really was heartbreaking to watch this vibrant and physically active man lose his strength. We truly appreciate all your support and prayers. Arrangements entrusted to Vermeulen-Sajewski Funeral Home, 46401 Ann Arbor Road West, Plymouth. To share a memory, please use the share a memory tab on this webpage.

The family of Albert Terrance Taft created this Life Tributes page to make it easy to share your memories.

Send flowers to the Taft family.