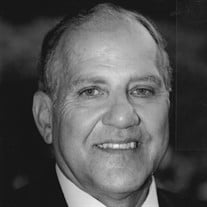 Alfred A. Roperti, 90, passed away Saturday, February 19, 2022 at Providence Hospital in Novi. He had awoken that morning, as he had for the past 43 years, in the house that he and his wife had made their home. He was predeceased in death by his parents, Tomas and Mary Roperti, and sisters Jennie Villella and Theresa Cimino. His beloved wife Virginia Grace Roperti passed on 28 years before. He is survived by his daughter, Gina (Ronald) Roperti and by his sister Christine (Wesley Bates) Roperti. Also, nephews Tony Skrabut and Tommy (Ferida) Roperti, Frank (Rosemary) Villella, Tom (Jeri) Villella, Richard Cimino and Michael (Lisa) Cimino, nieces Susan (Dave) Kuhr Gentile, and Laura (Chris) Gier, Linda (David) Short, Norine (Jack) Moskaitis and grandnieces and nephews Merida and Maverick Roperti, and Lydia Gier and many cousins nephew and nieces. Fred was born in Detroit on September 3, 1931 in Detroit, Michigan. He lived in Detroit until his family moved to Livonia in the 1942 and began farming, first dairy cattle then later turkeys, which grew into today’s Roperti’s Turkey Farm. Livonia did not have a high school at the time, so young "Al” as he was called in high school, attended Plymouth Salem High School, graduating amongst the great class of 1949 who are proudly called The 49’ers. Fred began working with his brother-in-law in construction, installing plumbing lines in Detroit’s post war boom houses. He found after a few years of the extreme heat and cold of working outdoors in Michigan, that attending college with a career indoors might be more to his liking. He enrolled in Henry Ford Junior College and began his studies in 1951. He graduated (1954) and was about to begin studies at University of Michigan when he was drafted in the US Army the same year. Stationed in Japan, he wrote to anyone he could about securing an early discharge to resume his college education. His countdown calendar (in his photo album) was a log of days until he would be released, and is lore amongst his fellow recruits and his family. After discharge he attended and graduated from U-M with a Bachelor of Science in Engineering Mechanics. While studying, he went on a blind date with Virginia Willis, who after graduation became his wife in 1958 and the love of his life to this day. They moved to California so Fred could pursue his dream of working in the aerospace industry, NASA had just been formed that year and the race for space fueled his imagination. Fred worked for Lockheed designing missiles in Sunnyvale, California, near San Francisco. Fred and Virginia along with their California friends spent most weekends exploring California and the surrounding areas. After 5 years in California, home strings pulled, and Fred and Virginia moved back to Michigan, starting a family in Livonia just a few miles from his parents and where he grew up. Working first for LTV, another aerospace company, then joining Ford Motor Company in 1971, Fred worked to provide every advantage to his family. Everything he did was for his wife and daughter, eventually prompting a move to 13 acres in Salem Township, Michigan in 1977. A former corn field, he built the house, fencing, outbuildings and planted every blade of grass and tree while continuing to work at Ford. When he retired in 1997, his daughter heard many associates give honor to Fred’s significant contribution to the Ford F-150, which was redesigned in the years just prior to his retirement. Unfortunately, Fred had lost his wife in 1994 and the routine of working at Ford, and his many friends there, helped him through the loss. After he retired from Ford, he felt a need for something to do, so he started a tractor services business for a few years. He became more involved in his township’s government, concerned with preserving the rural character and peaceful lifestyle that he had moved to Salem to achieve. He was appointed a Planning Commissioner, then was elected Township Supervisor in 2000, serving for 8 years. He worked very hard to make Salem a place that he would always want to live. He also enjoyed travel, taking numerous cruises through the Caribbean, and two major trips that he cherished the memories of every day. One to Africa and Seychelles, which included a safari and living in a tent in the Maasai Mara in Kenya, a cruise through the Seychelle Islands, and stay and tour in Luxor, Egypt. The other special trip was a trans-Atlantic cruise from Florida to the Mediterranean, with visits throughout Europe and Africa. Fred lived an amazingly full life, from small town farm boy to US soldier in Japan, education, professional career, incredible tours from the savannahs of Kenya to the Vatican, and building a home and life in Salem. That was a lot to have achieved. But Fred really believed that being a good person – a good and faithful son, husband, father, and friend – meant everything. That was his greatest achievement. Visitation Wednesday, February 23rd 3-8 PM and Thursday, February 24th 2-8 PM at Vermeulen-Sajewski Funeral Home, 46401 Ann Arbor Road West, (between Sheldon & Beck) Plymouth. Family and Friends to gather Friday, February 25th 10 AM until the 11 AM Funeral Service at the funeral home. Entombment Parkview Memorial Park. Memorial contributions may be made to Huron Valley Humane Society, P.O. Box 7026, Liberty Station, Ann Arbor, MI 48107-7026 or Disabled American Veterans, P.O. Box 14301, Cincinnati, OH 45250-0301. To share a memory, please use the Share a Memory tab on this web page.

Alfred A. Roperti, 90, passed away Saturday, February 19, 2022 at Providence Hospital in Novi. He had awoken that morning, as he had for the past 43 years, in the house that he and his wife had made their home. He was predeceased in death by... View Obituary & Service Information

The family of Alfred A. Roperti created this Life Tributes page to make it easy to share your memories.

Send flowers to the Roperti family.