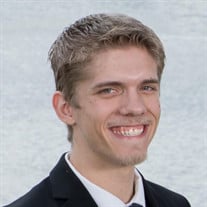 Andrew (Andy) M. Knieriem tragically and shockingly passed away alone in his apartment on Sunday September 27, 2020 at the young age of 24 when he lost his silent battle with deep depression. Andrew grew up in Toledo & Sylvania Ohio and graduated Cum Laude from Livonia Michigan's Winston Churchill High School in 2014 with a GPA of 3.5. He began his career path in computer programming when he reprogrammed his calculator in junior high and continued that passion till his last day when he shared a fractal design he created using a new software algorithm. He attended Schoolcraft College majoring in Computer Science, then transferred to the University of Michigan Dearborn campus working towards his B.S. in Computer Science. His first job, while still in high school, was with EnablePoint Inc. in Livonia as a web-developer and administrator. Andy also volunteered with the Livonia Warriors FIRST Robotics team as well as FIRST in Michigan as a web-site developer. After graduation, he also worked at MAHLE Powertrain and completed his career at Amrock Inc. in Quicken's Family of Companies as a DevOps Software Engineer. Andy had a zest for life and looked forward to the day when his career would be secure, when he could finally find the love of his life and get married, and he looked forward to starting his own family (and I am certain he would have made a great father). He had such a bright future as well as a kind and gentle heart. He will be deeply missed by anyone who ever knew him. Andrew is survived by a large and loving family … both of his adoring parents Paul Knieriem & Jennifer Tougas (Marshall), his caring step-mother Dawn Knieriem (French), his identical twin brother Alexander Knieriem, his older sister Victoria Longueuil, her husband Jason Longueuil, their son Theodore, Andrews' younger half-sister Elizabeth Knieriem, and younger half-brother Richard Knieriem, Andrew's paternal grandmother Gail Augustine (Berger), her husband Larry Augustine, their son Erik Augustine, Andrew's maternal grandmother Joy Marshall, grandfather and grandmother John Marshall and Jayne Marshall, Andrew’s step-grandparents David & Joyce French, Andrew’s half-sister Bethany Villada (Ford), his half-brothers Dakota and Logan Tougas, and his step-father Gene Tougas, Andrew’s paternal uncle Kevin Knieriem, maternal uncle David French, and his wife Kathy, as well as so many other great aunts, uncles, cousins, step-relatives, in-law relatives, and as he would say “out-law” relatives. He will be deeply missed by ALL who knew him. Funeral Service Friday, October 9th 6 PM at Harvest Bible Church, 6420 N. Newburgh Road, Westland. Visitation at church 10 AM-12 PM and 4-6 PM. In lieu of traditional flowers, the family requests very generous donations to be made to: National Suicide Prevention Lifeline for suicidal crisis or emotional distress 24 hours a day, 7 days a week, with over 170 local crisis centers across the United States. Suicide Prevention Life line 1-800-273-8255 Other worthy causes include: Edge Venture A men’s experiential retreat. Edge is focused on helping men defeat lies that have been holding them back for far too long. Call or text: 1-248-444-8386 (Mark Russell, Director of Operations) Focus On The Family Radio ministry & counseling providing a wide variety of broadcasts, podcasts, telecasts, films, websites, blogs and radio drama programs 1-800-232-6459. Klove Positive & Encouraging contemporary Christian music radio. List of K Love stations If you would still like to donate decorative items for the funeral service, Andrew would have appreciated LED candles or flowers which the family could keep forever. To share a memory, please use the Share a Memory tab on this web page.

Andrew (Andy) M. Knieriem tragically and shockingly passed away alone in his apartment on Sunday September 27, 2020 at the young age of 24 when he lost his silent battle with deep depression. Andrew grew up in Toledo & Sylvania Ohio and... View Obituary & Service Information

The family of Andrew Mackenzie Knieriem created this Life Tributes page to make it easy to share your memories.

Send flowers to the Knieriem family.