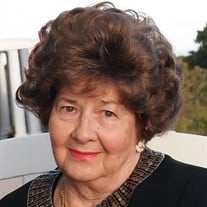 Beverley was welcomed into the arms of her Lord and Saviour on Christmas morning, December 25, 2021 at 88 years of age. Loving wife to Alan Marshall. Caring and loving mother to Cheryl Tissot (Mark) and David Marshall (Michelle). Cherished grandmother to Laura Beth Sheets (Rob), Kim Gordon (Dave), Logan and Malina Marshall and great grandmother to Evan Sheets (7 yrs.), Tyler Gordon (17mos.) and Hunter Gordon (1 week old). Beverley will be missed by her brother David Henry (Judy), sister-in-law Marilyn Henry, brother and sister-in-law’s in the Marshall family, and her many nieces and nephews. She was predeceased by her sisters Leora, Barbara and Shirley and brothers Herbert and Robert. Beverley was born September 21, 1933, daughter to Herbert and Beulah Henry in Detroit Michigan. Beverley graduated from Cooley High School in 1951 and continued her education at Detroit Bible College at night while working as a bookkeeper at a bank in downtown Detroit and then as a dental assistant for a number of years. Later she worked in Human Resources at Ford Motor Company until her marriage to Alan. She attended Bible camps and conferences as a child and came to receive the Lord Jesus as her Saviour at a young age. In her teens she attended the Dunkirk, NY Bible Conference and it is there she and Alan met and began their relationship in 1959. She and Alan were married in 1962 and raised two children. She attended and served the Lord at Dearborn Heights Assembly, enjoying numerous years helping in young peoples, children’s ministry and the yearly Thanksgiving Bible Conference. Beverley spent her married life raising and lovingly caring for her family. She had the gift of hospitality and enjoyed cooking, sewing, and playing the piano. Her Grandchildren brought her great joy and she loved having them over to play, make crafts and bake. She happily attended their many school concerts and sporting events. Grandma will be greatly missed and we all treasure the memories and the years we had with her. The family would like to thank the staff at American House, caregivers from the onsite Medical Team, and the Senior Alliance support for their compassionate care of our mom over the last 6 and a half years. There will be a private family burial and future memorial planned for Beverley. In lieu of flowers, donations may be given in memory of Beverley Marshall to Our Daily Bread (3000 Kraft Ave SE, Grand Rapids, MI 49512) or Upper Peninsula Bible Camp (PO Box 338, Little Lake, MI 49833). Psalm 18:30 “As for God, His way is perfect; the Word of the Lord is proven; He is a shield to all who trust in Him.” To share a memory, please use the Share a Memory tab on this web page.

Beverley was welcomed into the arms of her Lord and Saviour on Christmas morning, December 25, 2021 at 88 years of age. Loving wife to Alan Marshall. Caring and loving mother to Cheryl Tissot (Mark) and David Marshall (Michelle). Cherished... View Obituary & Service Information

The family of Beverley J. Marshall created this Life Tributes page to make it easy to share your memories.

Beverley was welcomed into the arms of her Lord and Saviour on...

Send flowers to the Marshall family.