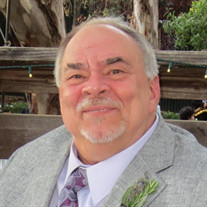 Bradford Marvel Bandt was born on February 2, 1948 in Detroit, MI, the first child of Marvel and Dolores Bandt. The family of three resided in Detroit for the first couple years of Brad’s life until farm life called his father Marvel back to Nebraska. The three of them picked up and moved to Wolbach, NE, a small town near St. Paul, NE. Farm life was hard but idyllic where Brad was able to roam the farmlands with his dog Bosco, who would meet him each day as he returned from school. Soon he was joined by younger sister Sheryl and 15 months later, another sister Bettiann, and then brother Loren three years later. The family of six was complete. Farm life proved too difficult to sustain, and mother Dolores was missing her family in Detroit, as well as the modern conveniences of indoor plumbing and central heat, so in 1956 they returned to the Motor City where they lived for the rest of the growing years of their children. Brad was an energetic son, always out playing sports with his friends and getting into the usual mischief that boys of his age found, but he was honest and hardworking. That led to him getting a job at age 13 to help out with Christmas and family expenses when his dad needed a double hernia operation and was unable to work, the family’s only breadwinner. Brad and several buddies found jobs selling donuts door-to-door and he gave his earnings to his parents to help with bills and Christmas presents for his siblings. On the fateful day of December 6, 1961, he went out after school selling donuts. One of his older friends had a used jalopy that he used to transport the boys, five of them, to various neighborhoods to sell their goods. On this particular day, a cold, dark afternoon when they were on their way home, the car broke down. Brad, a stocky, strong boy pushed the car along with two others while two boys directed traffic around the car. Horrifically a driver on the same road, Eight Mile in Detroit, was driving impaired and slammed into the car the boys were pushing, which left Brad a double amputee, losing both legs. Despite predictions from his doctors who declared he would never walk again; he overcame the challenge of having only one knee and through a lot of hard work and determination he was able to walk unassisted by crutches or canes. This changed the direction of Brad’s life. Instead of being able to pursue sports as a career-every young boy’s dream, Brad became a dedicated student, graduating from high school with honors and earning a full scholarship to Wayne State University where he earned a Bachelor’s Degree in Economics and the honor of being a Phi Beta Cappa student. After graduating Brad moved to California where through his marriage, he adopted his wife’s son Brandon and they had another son, Aaron. Brad was a devoted father to both boys and being a dad was the highlight of his life. He loved being a dad! When Brandon and Aaron were raised and no longer under his roof, Brad moved back to Michigan to be near his aging parents and siblings, as well as many friends. Brad had many hobbies including woodworking and writing. And he could, he liked to “brag” write a limerick about anything! I’m sure many of you were privileged to read these mostly funny writings. But he also wrote a loosely autobiographical rhyming prose that was so very well-written, as well as writings probing the deeper things of life, love and religion. The only thing he loved perhaps more than being a dad, was becoming a grandpa to Aaron’s son James, age 3-1/2 and daughter Lily, almost 1-1/2. They were the joy of his life and he loved to share pictures, videos and the conversations with James from his weekly Facetime calls. In addition to being a devoted father and grandpa, Brad was a loyal and giving brother and friend to many, always sharing the foods he loved to cook, particularly pasta, with friends and neighbors. Despite the many physical challenges Brad had, he also overcame cancer twice as well as many surgeries, he did not feel sorry for himself but was always interested in the lives of his friends and siblings. Brad became a Christian, professing his faith and trust in his Savior Jesus Christ and because of this, it can be said that all who share this same faith will again see Brad. Brad was preceded in death by his father Marvel Raymond Bandt and mother Dolores Maria Bandt, and is survived by sons Brandon, Aaron (Julie), grandson James, granddaughter Lily, sisters Sheryl (Eddie) Harmon, and Bettiann (Dale) Page, brother Loren (Nadine) Bandt, and many nieces and nephews. He was a great friend and brother, father and grandfather and will be missed by us all! Gathering Thursday, June 24th from 1 PM until the 3 PM Memorial Service at Vermeulen-Sajewski Funeral Home, 980 N. Newburgh Road (between Ford Road and Cherry Hill) Westland. Memorial contributions may be made to American Cancer Society, 20450 Civic Center Drive, Southfield, MI 48076. To share a memory, please use the Share a Memory tab on this web page.

Bradford Marvel Bandt was born on February 2, 1948 in Detroit, MI, the first child of Marvel and Dolores Bandt. The family of three resided in Detroit for the first couple years of Brad&#8217;s life until farm life called his father Marvel back... View Obituary & Service Information

The family of Bradford Marvel Bandt created this Life Tributes page to make it easy to share your memories.

Send flowers to the Bandt family.