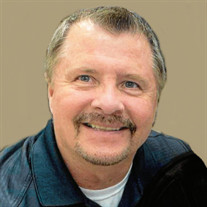 Carl Douglas Winekoff, Jr. went to his heavenly home on December 13th, 2020 at the age of 59 after a valiant battle with COVID-19. His firm belief in God and devotion to his family supported him in his struggle and ultimately gave him peace. His beloved wife of 19 years, Nicolle, was at his side when he passed away. Carl was born to Carl and Della Faye Winekoff in Ypsilanti, Michigan on May 10, 1961. Growing up, Carl was introduced to his Christian faith and taught the importance of family and hard work, things that would become important aspects of his life and what he valued most. Carl and his late brother Rick excelled in athletics from an early age. Carl lettered in multiple sports for Belleville High School, including baseball, football, track and field, and wrestling. It was wrestling, however, where he shone the brightest, leading him to all-state and national honors and athletic scholarships at Indiana University and Eastern Michigan University, where he received a Bachelor of Science Degree in Biology. He remained involved in wrestling throughout his entire life as a coach, mentor, and advocate for the sport. Carl would eventually take up the family locksmith trade and business from his uncle. He owned Swan’s Locksmith in Belleville for many years before working as regional director of loss prevention for Meijer and then later as the district locksmith for Walled Lake Schools for the last 12 years. Carl was immersed in his faith. He was a member of Fair Haven Baptist Church for the last 13 years, where he was actively involved in helping spread the ministry of Jesus Christ. He enjoyed teaching Sunday school, participating in community outreach efforts, and sharing the Word of God with others. Carl was blessed with a large and loving family. He taught his children the importance of faith and encouraged them to explore the teachings of the gospels. He shared with them his love for physical activity, sports, adventure, and the outdoors. His grandchildren knew him as “papa.” He lived for spending as much time as he could with his growing family. Carl was a protector and beacon of strength for his family and others to turn to for encouragement during life’s twists and turns. He always made time to help solve problems and offer advice. He loved to laugh, and his laughter would often bring a room together. He is dearly missed by his family, who celebrate that he is at peace with his creator. Carl is survived by his wife, Nicolle; his mother, Della Faye; his sons, Carl, Joshua, Ryan, Brent, Kevin, and Chase; his daughters, Amber and Sarah; his siblings, Shawn (John) Richmond, Tammy (Danny) Bledsoe; his grandchildren, Evah, Vayda, Hugo, Evelyn, Ricky, Jameson, and Olivia. He was preceded in death by his father, Carl, and his brother, Rick. Visitation will be held Saturday, January 2, 2021, from 10 a.m. to 2 p.m. followed by Funeral Services at 2 p.m. at Fair Haven Baptist Church located at 34850 Marquette St. Westland, MI, 48185, (734) 728-4549. *Masks Required*. The service will also be accessible through live streaming at the Church's Youtube page: https://youtu.be/bpwlMv_a9lc Fairhaven Baptist Church Westland If you would like to donate to Carl’s funeral fund, you can do so through Fair Haven Baptist Church. To share a memory, please use the Share a Memory tab on this web page.

Carl Douglas Winekoff, Jr. went to his heavenly home on December 13th, 2020 at the age of 59 after a valiant battle with COVID-19. His firm belief in God and devotion to his family supported him in his struggle and ultimately gave him peace.... View Obituary & Service Information

The family of Carl Douglas Winekoff created this Life Tributes page to make it easy to share your memories.

Send flowers to the Winekoff family.