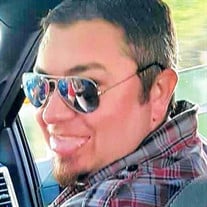 Daniel Roger Altman, age 38, of Plymouth, Michigan passed away Thursday, July 9, 2020 peacefully in his sleep with his family by his side at the University of Michigan Hospital in Ann Arbor, Michigan. “Dan the Man” or “DTM” was born on August 3, 1981 in Sault Ste Marie, Michigan to Mark Altman and Kim Schorfhaar. His family moved to Oscoda, Michigan in 1982, where he lived until he left for college in 2000. He eventually went on to obtain a Bachelor of Science degree in Electrical Engineering from Bradley University in Peoria, Illinois. In 2015, Danny moved to Plymouth, Michigan where he worked with Jordan Koenig, his best friend since the first grade, as an Electrical Engineer at M & E Engineering. He was an awesome, laid back dude who you could not help but love! DTM was a heavy metal enthusiast and an incredibly talented musician who loved playing the guitar. He enjoyed spending time anywhere in the outdoors and especially on the Ausable River, where he and his dog Brewtus would often go camping. Danny was also an excellent cook and enjoyed trying out new recipes. Dan was an avid reader and contemplator of history and different religions and cultures. Danny is survived by his mother Kim Schorfhaar, and stepfather Mike Schorfhaar of Oscoda, Michigan; his father Mark Altman, of Kinross, Michigan; brother Corey Altman of Plymouth, Michigan; sister Erica Schorfhaar of Saginaw, Michigan; and nephews Rylan Taylor and Finn-Carter Karow; Grand parents Roger and Nancy Silverthorn of Oscoda, Michigan and Grandfather Ernie Schorfhaar of Mikado, Michigan. He was preceded in death by his grandparents Gerald and Margaret Altman, and Sandy Schorfhaar. Danny will be missed terribly by all his many beloved family and friends. Due to the Covid-19 outbreak, a celebration of life will be announced at a later date. Online condolences may be made at bureshfuneralhomes.com.

The family of Daniel Roger Altman created this Life Tributes page to make it easy to share your memories.

Send flowers to the Altman family.