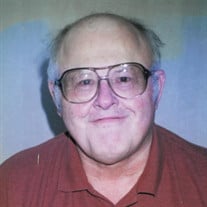 Darell Peter Saunders Born April 11, 1938 to John T. and Myrtle A. Saunders of Geneseo, ND where he grew up on the family farm. The family farm located near Geneseo, N.D. brought many trips back to spend quality time with family and friends. He had two older siblings Jack and Jeanette that shared the chores with him growing up on the farm. Darell graduated from Northern State University in 1961 and spent the first two years of his teaching career in Maryland. He then moved to Onstead, MI where he taught for another 3 years before finishing his teaching career in Wayne Westland school district after 32 years. During his time in Onstead he met Carol Godsave, they married and had two sons, Travis and Todd. Darell was active in Indian Guides, Boy Scouts, coaching soccer, bowling, as well as, being an avid hunter and fisherman. His hunting has provided venison, elk, bear, moose, antelope, and turkey to the Saunders family table. Darell was also an active member of the Western Wayne County Conservation Club. Darell, Carol and the boys spent many a summer at the family cabin on Stuart Lake near Clitherall, M.N. The family cabin was built by Darell’s grandfather back in the good ole days. It was a place where there was always work to be done but a swim in the lake was the best treat of all. It was here that the boys saw the Northern Lights for the first time. He loved to take the boys and family out to go fishing at all the spots that his father had shown him many years before. Family and friends would gather to enjoy each other’s company, go fishing, and take a walk down memory lane. It is still a place that holds a special place in all of the family’s heart. He had a love for sports and played Legion baseball while he was growing up on the farm. He became a soccer coach by default as one of the boys coach has to resign. He coached recreational soccer for 10 years and was very successful. He coached the amazing and always feared “Burgundy Bunch” that at one point went 17-0 over two seasons. He was offered positions to coach high school and select soccer but always wanted to cater to the recreational players. Many kids from the Plymouth-Canton Community came through these teams and went on to be amazing young men. He also was an avid bowler and participated in the Cherry Hill Teachers bowling league at Westland Bowl for 23 years. He had an average of 170. He never attained the perfect 300 game but continued to strive towards that goal his entire bowling career. He was an avid hunter and that was his true passion. He never would pass up an opportunity to travel and go hunting. If it was able to be hunted in North America he traveled and spent the time and created amazing memories with family and friends. If you ever visited Carol and Darell at their house in Plymouth or their condo in Canton you would see the many mounts ranging from elk, caribou, bear, deer, turkey, and even a moose. Darrel is survived by his wife of 57 years, Carol Saunders, his two sons, Travis (Carol) and Todd (Marla) and his two grandsons Troy (Erika) and Jake (Jordan). He preceded in death by his parents John T. and Myrtle Saunders, his sister Jeanette Butler, niece Kathy Saunders, nephew Dan Saunders, and nephew Dennis Butler. Funeral Monday, November 29th 12 noon at Vermeulen-Sajewski Funeral Home, 46401 Ann Arbor Road West, (btwn Sheldon & Beck) Plymouth. Visitation Sunday, November 28th 2-6 PM and Monday, November 29th 11 AM until the noon service. Memorials may be made to the Plymouth Rotary Foundation, P.O. Box 5401, Plymouth, MI 48170. To share a memory, please use the Share a Memory tab on this web page.

Darell Peter Saunders Born April 11, 1938 to John T. and Myrtle A. Saunders of Geneseo, ND where he grew up on the family farm. The family farm located near Geneseo, N.D. brought many trips back to spend quality time with family and friends.... View Obituary & Service Information

The family of Darell Peter Saunders created this Life Tributes page to make it easy to share your memories.

Send flowers to the Saunders family.