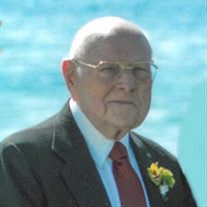 French, Dick, May 27, 2020 age 93 of Plymouth. Dick French was born near Pond Creek, Oklahoma November 13, 1926 and died May 27, 2020. After serving in the Merchant Marines in World War II, he and his brother operated a commercial salmon fishing business in Alaska. He attended Oklahoma University in Woodward, Oklahoma, where he met Dolores Adams and they married in 1950. Dick began a successful forty-year business career with General Motors in Oklahoma, rising rapidly to management positions. Throughout his tenure with GM, he was transferred to Texas and Tennessee, and finally to Michigan in 1968 where he and Dolores made their final home. Dick was Manager of General Motors Parts Division in Livonia, Michigan until his retirement in 1989. Upon retirement, Dick continued to be active in community affairs and was an Elder in Trinity Evangelical Church in Plymouth. He enjoyed playing pool and card games with family and friends. Dick was devoted to his family and was very proud of his three children, three grandchildren and four great grandchildren. His life was saddened by the death of his son, Don, age 16, in 1977, his wife, Dolores, in 1993, and daughter Denise (French) Barackman in 2012. He is survived by his son, Douglas (Mary) French, granddaughter Melissa (Shane) LaChappelle, grandsons Mike (Alethea) French and Mitch (Emily) French, and four great grandchildren Siena, Stella, Hailey and Nicholas, and son-in-law Chuck (Denise) Barackman. He will be greatly missed by his family as well as his many friends in the community and at Trinity Church. Private cremation services are arranged by Vermeulen-Sajewski Funeral Home in Plymouth, with interment at Glen Eden Memorial Park, Livonia, Michigan. Contributions in Dick's name may be made to the Deacon's Fund at Trinity Church, 10101 Ann Arbor Road, Plymouth, MI 48170. To share a memory, please use the Share a Memory tab on this web page.

French, Dick, May 27, 2020 age 93 of Plymouth. Dick French was born near Pond Creek, Oklahoma November 13, 1926 and died May 27, 2020. After serving in the Merchant Marines in World War II, he and his brother operated a commercial salmon fishing... View Obituary & Service Information

The family of Dick French created this Life Tributes page to make it easy to share your memories.

Send flowers to the French family.