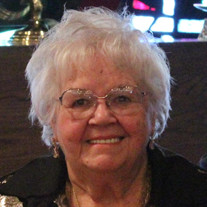 Wozniak, Dorothy Wilma February 12, 2022 age 93 of Westland. Born Dorothy Wilma Benesky January 24th, 1929, in the city of Larksville, Pennsylvania and later on moved to Edwardsville, PA. She was one of eleven children from parents Verna and Frank Benesky. While living in Edwardsville as a teenager she met her soon to be husband John Wozniak who was a soldier heading out to war and would marry later in 1953. Dorothy and John moved to Detroit, MI in 1953 after their marriage. They would then move to Lincoln Park in 1954 where they had their three children, daughter Marian, son John ‘Jay’ and daughter Carol. John would get a job as a carpenter and Dorothy took a job at Howard Johnsons in Southgate, MI. John later became employed at General Motors and the family moved to Westland, MI in 1968 where Dorothy worked at the Flaming Pit in Livonia. Dorothy lost her husband John in 1980. Dorothy was the quintessential mother and grandmother, she always filled the house with life. There was always singing and dancing and she loved every second of it. She had a love for cooking, the go-to for how to make just about anything. The family favorites were her homemade pierogies and sweet potatoes and took pleasure in teaching how to make both. She had a love for romantic comedies and period pieces. She could recite Clueless and Pride and Prejudice almost completely by heart as those were her favorite. When you stopped by for a visit you could almost always catch her watching either of those, Price is Right or have Turner Classic Movies on as she played solitaire. For the past 50 years she was an avid lotto player and no matter what always played her numbers each week. She was giving and donated to many charities in Michigan and outside of Michigan. She loved dogs and had two very special dogs in her life. She will be profoundly missed by all who knew her. She is survived by her three children Marian (Ted) Chilkiewicz, John ‘Jay’ (Lori) Wozniak and Carol Ann (Dave) Essig, and six grandchildren Chelsea, Andrea, Laura, Johnathan, Kendell and Kahley. Visitation Friday, February 18th from 11 AM until the 1 PM Funeral Service at Vermeulen-Sajewski Funeral Home, 980 N. Newburgh Road (between Ford Road and Cherry Hill) Westland. Interment Glen Eden Memorial Park in Livonia. Memorial contributions may be made to Michigan Humane Society, 30300 Telegraph Road Suite 220, Bingham Farms, MI 48025-4509. To share a memory, please use the Share a Memory tab on this web page.

Wozniak, Dorothy Wilma February 12, 2022 age 93 of Westland. Born Dorothy Wilma Benesky January 24th, 1929, in the city of Larksville, Pennsylvania and later on moved to Edwardsville, PA. She was one of eleven children from parents Verna and... View Obituary & Service Information

The family of Dorothy Wilma Wozniak created this Life Tributes page to make it easy to share your memories.

Send flowers to the Wozniak family.