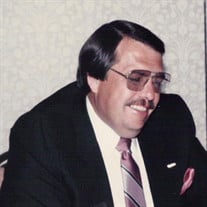 Volker, Edward L., December 25, 2020 age 81 of Plymouth, passed peacefully on December 25, 2020 at St. Mary Mercy Hospital in Livonia. He was born October 29, 1939 in Flint, MI. Beloved husband of Lynne for 60 years. Loving father of David (Lisa) and Danielle. Very proud grandfather of Jessica, Jenelle, Alex, and Nick, and great grandfather (granddad) and kindred spirit of Hunter. Dear brother of Gary and sister Janet (deceased) Ed will be greatly missed by his much loved nieces and nephews. Ed was not only an anchor for the entire family, he was also a mentor, father figure, confident and friend to many at Ford Motor Company. He was an avid golfer, voracious reader and brilliant card player. A Memorial Gathering will be held at a later date. Donations can be made to Doctors without Borders USA, P.O. Box 5030, Hagerstown, MD 21741-5030 or Blood-N-Fire Ministries of Muncie, IN established by Ed’s niece and her husband. Arrangements entrusted to Vermeulen-Sajewski Funeral Home. To share a memory, please use the Share a Memory tab on this web page. Family Obituary: Ed Volker was the Ultimate Ford Heavy Trucker He came to Ford Motor Company in 1971, after leaving GM in 1966 (a story for another time) and a stint at Midland Ross. His extremely diverse background at Ford began as a Steering/Suspension Design Engineer. After a development assignment at Engineering Staff, Ed returned as the Group Leader of the Steering/Suspension team. Ed then became the Manager of the Engineering Services Department. His next assignment was as the Dealer Special Order (DSO) Manager at the Kentucky Truck Plant (KTP). Ed will be remembered most for his outstanding leadership as Program Manager of the HN-80 Program. A position he accepted when Bill Ford personally reached him by phone in the “wilds” of the Upper Peninsula (U.P), while Ed was vacationing. He led the team in achieving multiple industry-leading features including (but not limited to): All New Clean-Sheet-of-Paper Vehicle Line-up of Five Models Best in Class Engine Cooling Industry Leading Chassis Ride Best-In-Class Human Factors Steel & Aluminum Cab using common tooling Ed led the team in using processes that were as innovative as the resulting product including early involvement of the Customers, Dealers, KTP, Service Providers, and Suppliers. The program had a total of over 7000 new tooled parts (NTP) which exceeded the rest of Ford Motor Programs combined for two consecutive years. Ed led the team in bringing the HN-80 Program home on time and under-budget with only a small fraction of the personnel and budget allocated to light vehicle projects. All who worked on the HN-80 Program will remember Ed’s Team Motto: “Fix the Problem – Not the Blame”. They will also have vivid memories of Ed holding up the “No Whining” sign during report-out meetings. Despite the stress he always made it fun. During the groundbreaking achievement of the HN-80 program, Ed rose to the position of Heavy Truck Vehicle Line Director. He then endured pressure to retire from an upper management individual who did not have a full grasp or appreciation of the team’s accomplishments nor of Ed’s extraordinary and exceptional performance. Ed’s commitment and perseverance won out. He did not retire. When Ed drove the Job#1 truck off the end of the assembly line at KTP, Sales & Marketing introduced him to the press as the “Father of the HN-80” – a well-deserved description. Ford then needed the manufacturing space of KTP for Light Trucks and decided to sell the Heavy Truck Business. Ed coordinated the sale & transfer to Freightliner. He stayed to the end, making sure everyone at Ford was treated fairly and taken care of in the best way possible. The grateful team appreciated him being “The Last Heavy Trucker Standing.” He was then appointed the head of Global Testing Operations responsible for all Ford Product Development Testing World-Wide. His vast experience equipped Ed well in handling this important responsibility in his final role before retiring on his timetable. ELV is respected and loved by the hundreds of individuals that worked for and with him. Ed will be deeply missed but his legacy will live on through those he mentored as they pass on what they have learned from Ed’s leadership and example. Contributors: Jerry Hubbell, Tom Baughman, Ken Timmer and Dave Honiss

The family of Edward Lee Volker created this Life Tributes page to make it easy to share your memories.

Send flowers to the Volker family.