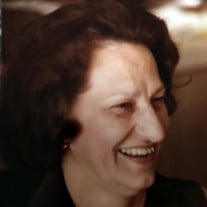 Esther Ritchey (nee Koslowsky), born in Detroit October 4, 1921 to the late Fred W. and Bertha (Rohde) Koslowsky, passed away peacefully in Farmington Hills on the morning of November 24, 2020. In 1957 she married Orville C. Ritchey, who preceded her in death on May 13, 1970. The couple worked different shifts during the week, so their years of weekends were lovingly spent together at their cabin at Houghton Lake. Esther worked for Winkelman's Department Stores in accounting for many years. She and Orville were former members of Atonement Lutheran Church in Dearborn. When Esther and her recently-widowed sister, Ruth Gribbons (now deceased), relocated to Redford Township in 1986, Esther became an active member of Immanuel Lutheran Church in Dearborn Heights. After she retired, Esther literally travelled the world with Jack and Marilyn Butler. Her infectious laughter and loving smile will always be in our hearts. She was gracious, soft-spoken, but strong. And always a lady. She remained in her home until June of this year. Esther's family includes her cousins, Rick (Jean) Schoenberger, and Bonnie (Dave) Jacobs and their families; grandchildren Eric (Jay Jesensky) Butler and Diane (Mike) Veshi; great-granddaughter, Emily Butler, and former son-in-law, Jack Butler. She will be laid to rest on Saturday, November 28, 2020 at 12:00 noon at Roscommon Township Cemetery, Houghton Lake, alongside her husband Orville. Contributions may be made to any Lutheran Church organization, or the charity of the donor's choice. Arrangements by Vermeulen-Sajewski Funeral Home – Plymouth. To share a memory, please use the share a memory tab on this web page.

Esther Ritchey (nee Koslowsky), born in Detroit October 4, 1921 to the late Fred W. and Bertha (Rohde) Koslowsky, passed away peacefully in Farmington Hills on the morning of November 24, 2020. In 1957 she married Orville C. Ritchey, who preceded... View Obituary & Service Information

The family of Esther L. Ritchey created this Life Tributes page to make it easy to share your memories.

Send flowers to the Ritchey family.