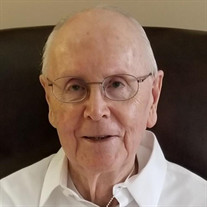 Gerald Eugene Moore, 85, went home to the Lord on February 23, 2021. He was a resident of Canton, Michigan for the last forty-eight years and was with family when he passed. Jerry was born in Detroit, Michigan on April 27, 1935, the second child of Charles and Ruth Moore. Jerry graduated from University of Detroit Jesuit High School in 1953 and served in the U.S. Army in Japan. He received his bachelor’s degree in Industrial Engineering from Lawrence Technological University and a Master’s degree in Business Administration from the University of Detroit Mercy. He met the love of his life, Maureen (Ruane) Moore in 1955 when he was on leave from the Army and visited the vacation home of one of his Army friends, Bill Ruane. Jerry and Maureen were married in 1959 and raised five kids. Jerry began his career in the automotive industry working for Ford and Chrysler. He then shifted to retail, working for Hudson’s before getting into the healthcare industry. He spent the majority of his career in hospital administration, serving as Chief Executive Officer of Holy Cross Hospital in Detroit before eventually retiring from Macomb Hospital. Jerry’s greatest treasure in life was his family. He adored his wife, Maureen, and they were married for 60 years before Maureen’s death in November 2019. He referred to their marriage as a 60 year love affair. They were always together and enjoyed going to the movies and spending time with their kids and grandkids. He was so proud of each of his five kids and fifteen grandkids and had a special and unique relationship with each one of them. He was always the biggest cheerleader for each of them and provided wisdom and advice up until his passing. He did the most teaching by how he lived his life, always striving for excellence and putting his needs behind those of others. He also had great relationships with each of his sons- and daughters-in-law and treated them as his own kids. Jerry loved to read and was a fan of history and mystery novels. He loved Big Band and Classical music and had an amazing collection that could often be heard playing in the house. He also had a special fondness for musicals. Prior to physical limitations later in life, he loved to work around the house and was very handy. Although oftentimes serious, Jerry had a devilish sense of humor and loved to joke and tease. Those he loved were the most frequent targets, including his many nieces and nephews. Jerry is survived by his children Kathy (Dan) Hayes of Parkland, Florida, Colleen (Murray) Howe of Sylvania, Ohio, Jerry Moore of Plymouth, Michigan, Cheri Gordon of Canton, Michigan and Chuck (Teri) Moore of Birmingham, Michigan; grandchildren Tim (Holly) Hayes, Brian Hayes, Scott Hayes, Meaghan (Doug) Stoinski, Gordie Howe, Corey (Davis) Howe, Sean Howe, Connor Moore, Sydney Moore, Nick Gordon, Cassidy Gordon, Erin Moore, Ryan Moore, Sean Moore and Ethan Moore; and great-grandchildren Casey Johnson, Jacob and Josh Hayes, Lucien Stoinski and Hart Howe. He is also survived by his sisters Pat (Jack) Teed and Peggy (Norm) Van Riper. He was preceded in death by his wife, Maureen; parents, Charles and Ruth Moore; and sister Mary Lou Connors. The family would like to especially thank Jerry’s caregiver, Drema Townsend, who was with him every day and provided such joy to him. A funeral mass will be held at St. Thomas a’Becket Catholic Church at 555 South Lilley Road in Canton, Michigan on Saturday, February 27, 2021 at 11:00 am. If you are unable to attend in person you may join the family remotely via Facebook live stream at: facebook.com/vermeulensajewskifuneralhome/live/ In lieu of flowers, memorial donations may be made to University of Detroit Jesuit High School and Academy, 8400 N. Cambridge Ave., Detroit, MI 48221 or at www.uofdjesuit.org; or to Angela Hospice, 14100 Newburgh Rd., Livonia, MI 48154 or at www.angelahospice.org.

Gerald Eugene Moore, 85, went home to the Lord on February 23, 2021. He was a resident of Canton, Michigan for the last forty-eight years and was with family when he passed. Jerry was born in Detroit, Michigan on April 27, 1935, the second... View Obituary & Service Information

The family of Gerald "Jerry" E. Moore created this Life Tributes page to make it easy to share your memories.

Send flowers to the Moore family.