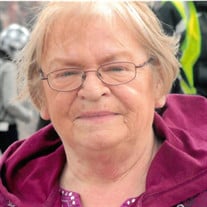 Gloria Jean (Lassila) Briski, 76, of White Lake, passed away on January 26, 2022, at the MediLodge care facility in Howell, where she had been a resident patient for the past year. Gloria was born on May 29, 1945, in Hancock, the daughter of the late Wilbert and Elaine (Lampinen) Lassila, graduating with the Jeffers High School Class of 1963. On December 7, 1963, she was united in marriage to Paul Briski in Atlantic Mine. They briefly resided in Manhattan, Kansas, during Paul's Army service, and then for the remainder of their marriage made their home in the metropolitan Detroit area, residing in Detroit, Westland, Garden City and White Lake. Gloria spent her entire life dedicated to her work and devoted to her family. In the early years, she worked as a hostess at the Egg & I restaurant in Detroit, followed by 30 years of service at Kmart in Westland, until her retirement in 2006. For several years following, Gloria worked at Kohl's in Westland, ever needing to keep busy. She and Paul raised four sons, Stephen, David, Duane and Brian, and she then turned her attention to her four grandchildren, Jessica, Katie, Brandon and Angelina. Her children and grandchildren meant more to her than anything else, and it showed in every caring action she bestowed upon them, through thick and thin, never wavering in her unconditional love. That devotion could never be questioned and extended into the later years as she cared for her aunt, Evelyn Kuopus, and mother-in-law, Lucille Briski. She also cared deeply for animals and loved without bounds her dogs - Candy, Dusty, Miss Bear, Samantha and Buffy. Fiercely proud of her Finnish heritage, throughout her life Gloria relished in swimming, tending to her flower beds and going to garage sales, finding treasures of all sorts. In addition, for several years she enjoyed volunteering as an usher at the Fox Theatre in Detroit. Gloria was preceded in death by her parents; her sons, Stephen and Duane; her twin sister, Rose Perala; and her brother and sister-in-law, John and Joyce Lassila. Gloria is survived by her husband of 58 years, Paul; sons, David and Brian; grandchildren, Jessica (Tyler) Berens, Katie Briski, Brandon Briski and Angelina Briski; great-grandchildren, Aiden Berens and Abigail Berens; sisters, Patricia Yates and Betty Albright; brother-in-law, Peter Perala; nieces, Kim Lassila and Darcie (Matt) Leipnitz; nephew, Bradley (Ann) Perala; and numerous cousins and friends. A memorial service for Gloria will be held at 5 PM on February 5, 2022, at the Vermeulen-Sajewski Funeral Home in Westland, with visitation beginning at 2 PM. Interment will take place later in the year at the Great Lakes National Cemetery in Holly. In lieu of other expressions of sympathy, the family requests memorial contributions be made to the Alzheimer's Association, 25200 Telegraph Road, Suite 100, Southfield, MI 48033-7443. To share a memory, please use the Share a Memory tab on this web page.

Gloria Jean (Lassila) Briski, 76, of White Lake, passed away on January 26, 2022, at the MediLodge care facility in Howell, where she had been a resident patient for the past year. Gloria was born on May 29, 1945, in Hancock, the daughter of... View Obituary & Service Information

The family of Gloria Jean Briski created this Life Tributes page to make it easy to share your memories.

Send flowers to the Briski family.