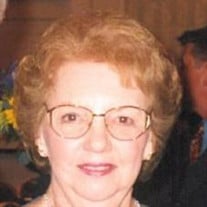 Helen Sheila Wishart McGhee Johnson died peacefully on Friday afternoon, June 5th, 2020, at Addington Place in Northville, Michigan. She was 90. Sheila was born on December 15th, 1929, in Cardenden, Scotland, the only child of James and Christian... View Obituary & Service Information

The family of Helen Sheila Johnson created this Life Tributes page to make it easy to share your memories.

Send flowers to the Johnson family.