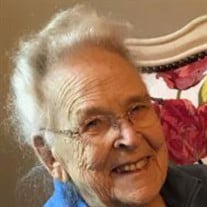 Irene (Kevelighan) Westerbur passed away peacefully at her residence, under the care of family, hospice, and the staff of Brighton Gardens residence, on July 3 at the age of 97. Irene was the devoted wife of Melvin for 66 years. Melvin pre-deceased Irene in 2013. She leaves behind daughter Joyce Westerbur (Tony Davis), son Ted Westerbur (Patricia), and daughter Nancy (Thomas Palmer). Her grandchildren are Derek Westerbur (Sunny), Ross Westerbur (Wendy), Andrew Palmer, and Bethany Palmer. Great-grandchildren are Adam, Alec, Aaron and Aidan Westerbur, Raphael Palmer, Makenna Waclawsky (Eddie), and Brenna Wallentine, and great-great grandson Luca Waclawsky. She will be missed as well by nieces and nephews, and many cherished friends and neighbors. She was preceded in death by her brothers Thomas, Howard, Arnold, and Wilfred Kevelighan. Her younger sister Ruth van der Wal of San Antonio TX, and her sister-in-law Gloria Kevelighan of Livonia, MI, also survive. Irene was deeply devoted to her Christian faith, her family, and friends. Irene will be remembered as intelligent and hard-working deeply caring, generous with her time and attention, tender-hearted, shy, and preferring to work behind the scenes, but with flashes of feisty “fighting Irish”. These traits served her well through the many experiences she faced during her long life. She was born in Detroit Michigan on July 21, 1923, the third of six children, to John and Julia Kevelighan. As the oldest girl, she was given family responsibilities at a young age. Like so many, the family experienced difficult, hungry times during the Depression, with her Irish immigrant father even going to Canada to find work in the wheat fields to send money back for his family. He later became a milk delivery man using a horse and buggy. As a teenager, Irene worked the lunch counter and soda fountain at that Detroit institution, Sanders! She learned to drive on a stick shift at the age of 14. World War II found Irene working at the Willow Run Bomber Plant. She was an actual “Rosie the Riveter”, putting rivets in the wings of the B-24s. She shared the war years sacrifices of Americans on the “home front”, with rationing of everything from sugar to nylon stockings to gasoline, to say nothing of the anxiety over loved ones serving in the war zones. At the end of the war, Melvin came home following his military service from 1941 - 1945, having served in North Africa, Italy, then Normandy. He and Irene resumed their romance, and on August 15, 1947, Melvin made the tall chestnut-haired beauty his bride. Following the end of the war, she worked at Burroughs running the spare parts supply, until the birth of her first child, Joyce. With contributions of skilled friends and family, the couple built a house on the edge of Detroit. Two more children were born, Ted in 1951, and Nancy in 1955. With Mel working as a mechanic for road construction companies, and out of town for all but the weekend much of the time, Irene kept things at home running smoothly. Talented with numbers, she was an excellent money manager, and loved few things as much as a bargain. Well into her 90s she could balance her checkbook in her head. As they grew up, she worked hard to make sure the children were always well attired, spending much time ironing so their clothes were just so. Irene was fiercely protective of her brood and was ever alert for their safety and interests. She ferried her offspring to years of piano lessons, sacrificing to pay for them, and various after-school classes and activities. There was never any doubt that getting excellent grades was a priority! The family had a series of pets through the years, and a love of dogs continues in the next generation. Mel and Irene had several beloved King Charles Cavalier Spaniels in later years. Growing up, the “kids” spent many wonderful times with cousins at Camp Dearborn and Island Lake. Providing meals away from home, towels, dry clothing, and of course supervision had to have been a challenge for Irene, her sister Ruth and sister-in-law Tillie Kevelighan, but it made for great memories for the cousins. Possibly what she loved best were babies and toddlers, whether part of the family, neighborhood or fellowship. They always brought a smile of delight for her. She cared deeply that the vulnerable, human or animal, be treated with tenderness and kindness. It was impossible to visit the Westerbur home without being plied with a variety of goodies from the stash Irene kept on hand. Guests could count on being very well fed. As an empty-nester, Irene enjoyed working as an election poll worker and was keenly appreciated for her meticulous work. For years, Mel and Irene enjoyed having Christian fellowship meetings in their home; she made sure the house was tidy and welcoming. Her favorite hymns had the theme of Divine Love: #365 Loved Of God, and #216 May thy Perfect Love. .. A year ago, in February, Irene suffered a fall and broken arm. Her daughter-in-law Pat, a retired physical therapist, defined a set of exercises for Irene to regain strength in her arm, and build up strength overall. Irene eagerly looked forward to the thrice-weekly exercise sessions with Pat and the results were quite remarkable. And so, we mourn the loss of yet another of the Greatest Generation, our very own Rosie the Riveter. Irene’s family wishes to express deepest gratitude to all who visited her (when that was still possible), sent cards and called her. The service will be livestreamed via Facebook at: facebook.com/vermeulen sajewskifuneralhome/live/ on Monday July 6 beginning at 10:00 AM. To share a memory, please use the share a memory tab on this webpage.

Irene (Kevelighan) Westerbur passed away peacefully at her residence, under the care of family, hospice, and the staff of Brighton Gardens residence, on July 3 at the age of 97. Irene was the devoted wife of Melvin for 66 years. Melvin pre-deceased... View Obituary & Service Information

The family of Irene M. Westerbur created this Life Tributes page to make it easy to share your memories.

Irene (Kevelighan) Westerbur passed away peacefully at her residence,...

Send flowers to the Westerbur family.