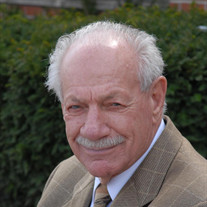 Jamiel M. “Jim” Jabara, 93, of Plymouth, Michigan, passed away on January 17, 2022. He was born on January 13, 1929 to Sam and Mymonie Jabara in Mancelona, Michigan. He attended Michigan Tech University in Houghton, Michigan where he served as Vice President of his senior class and graduated in 1950 with a Bachelor of Science in Civil Engineering. After serving as a First Lieutenant in the U.S. Army during the Korean conflict, he worked until 1959 in structural steel design and sanitary engineering at Commonwealth Associates, Inc. in Jackson and Grand Rapids, Michigan. Seeing an opportunity to start his own business, he and his brother Kalid bought Plymouth Tank and Fabricating Company (later called Enviro-Fab, Inc.) and expanded to three locations in southern Michigan which they sold to the Hillman Company in 1976. Shortly thereafter, he launched J.M.J. Properties, a real estate development and management firm. Over decades Jim was instrumental in changing the face of downtown Plymouth with his many commercial projects. In Jim’s own words: “We developed Forest Place and the Plymouth Landing in downtown Plymouth. We converted a lazy side street to a “second Main Street.” After our projects were completed, other store owners started improving and renovating their buildings, which turned this street into a thriving commercial district.” Jim was a proud resident of Plymouth for sixty years and active in civic affairs as Mayor of the City of Plymouth from 1967-1969 and twice as City Commissioner from 1963-1971 and 1986-1993. The Lord Mayor of Plymouth, England visited our city in 1967 to celebrate the centennial of Plymouth’s incorporation as a village during Jim’s term as Mayor. Jim contributed his time and boundless energy to countless civic organizations: he was the Founder, Charter President and a 60-year member of the Kiwanis Club of Colonial Plymouth and board member of the Rouge Valley Chapter of the Michigan Society of Professional Engineers. Jim was a 50-year member and past Chairman of the Plymouth Corps of the Salvation Army and served as Chairman of the 35th District Court of Michigan. In addition, he was a board member of the Plymouth Family Services and the West Region board of the Michigan Cancer Foundation. In 1963 Jim was named “Man of the Year” by the Plymouth Junior Chamber of Commerce. He was selected in 1990 as a Distinguished Kiwanian by the Kiwanis of Michigan Foundation. In 2000 Jim was inducted into the Plymouth Hall of Fame where his contributions to the community were recorded in the Congressional Record of the United States Senate. In the fall of 2021 Jim received the prestigious Ruth Huston-Whipple Award for Civic Engagement and in 2021 was honored as “Citizen of the Year” by Plymouth’s “The Rock” Magazine. An enthusiastic alumnus of Michigan Tech University, Jim was vice president of his senior class and a member of the President’s Club and Second Century Society. He was also a recipient of the M.T.U Silver Medal and was a Life Trustee of the Michigan Tech Fund, having served ten years on the Board. In 1990 he was honored as a Distinguished Kiwanian by the Kiwanis of Michigan Foundation. As a private pilot and avid outdoorsman, Jim enjoyed flying, hunting and fishing throughout the United States, Canada and Africa. His home and office have many wall trophies on display. In 1983, pilot Jim and his three passengers survived a crash landing in a single-engine Cherokee Piper Lance when the fuel pump abruptly malfunctioned. Luckily all four survived and were able to walk away from the crash site. Jim was married to Jean Jabara for forty years until her death in 1991 and has been married to Anita Jabara since 1996. He has two sons, Michael Jabara and Marty Jabara; step-son Jason (Koeun) Marra; three grandchildren, Zan (Brent) Jabara Oakley, James Jabara and Jenna Jabara; two step-grandchildren, Joseph Marra and Matteo Marra and two great-grandchildren, Jason Jabara and Ian Oakley. Jim is survived by Essie Pringle and Abdeen (Holly) Jabara, the oldest and youngest siblings in the Jabara family, and is predeceased by siblings Frieda Rice, Selma Hegazi, Nayfe Jabara and Kalid Jabara. Public visitation was held on Tuesday, January 25th from 2:00 – 9:00 PM at Vermeulen-Sajewski Funeral Home, 46401 Ann Arbor Road West, Plymouth, Michigan. On Wednesday, January 25th there was a private funeral service and burial for the immediate family. The family is planning a Celebration of Jim’s Life at a later date. In lieu of flowers, memorial contributions may be made to Plymouth Kiwanis Foundation, c/o Mark Riegal, 47400 Stratford Drive, Canton, Michigan 48187 or the Plymouth Salvation Army, 9451 South Main Street, Plymouth, Michigan 48170 or online www.centralusa.salvationarmy.org/plymouth. To share a memory, please use the “Share a Memory” tab on this webpage.

The family of James M. Jabara created this Life Tributes page to make it easy to share your memories.