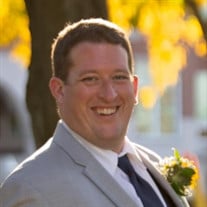 On Tuesday, November 24, 2020, Jim was called Home at the young age of 37 while living in England. He was born in Dearborn, MI on May 19, 1983. Jim was the beloved son of Mark and Karen Peoples, loving brother of Laura (Andrew) Hopson and John (Megan) Peoples, dear uncle of Caleb Peoples and Ella Hopson and cherished grandson of Robert and Nancy James. He is also survived by many aunts, uncles and cousins. Jim was preceded in death by his grandparents Richard and Natalie Peoples. Jim grew up in Canton with a zest for all life offered. He was born with a passion for music, possessing a God-given talent for the piano. He also played fife and was Commander in the Plymouth Fife and Drum Corps for many years. He played the trombone in the Plymouth-Canton Marching Band including the last year that they won the Bands of America Grand National Championships in 1999. He loved many types of puzzles from jigsaw and 3-dimensional puzzles to Rubik’s Cubes and tavern puzzles. He was an avid reader, and his inquiring mind was always seeking to understand how things worked and learning about different aspects of the history of the world. Two of his favorite television shows were Good Eats and Myth Busters. Jim was gifted with a towering build, which boded well during his time playing rugby while attending Western Michigan University. Despite his intimidating structure, he will always be known as our Gentle Giant, as he was blessed with the kindest of hearts. Jim loved the client site-based work that he did for WorkForce Software. His job led to travels all over the states initially and then to many countries including Finland, Israel, United Arab Emirates and Canada. He was based in England, living in Twickenham, just outside of London for the past 4-1/2 years. Jim loved to travel. He treated himself to a trip to Hawaii to celebrate his 30th birthday. His love of adventure led him to many additional countries such as Germany, Scotland, Spain, Italy, the Czech Republic, New Zealand and Australia, where he would hike, participate in 5K’s, run inter-country mountain challenges, and absorb the culture. Jim’s love of travel, adventure, and all life had to offer was eclipsed only by his love for his family—a family that will miss him dearly and treasure his memory and impact for generations to come. Visitation will be Friday, December 11th 5-9 PM at Vermeulen-Sajewski Funeral Home, 46401 Ann Arbor Road West, (between Sheldon & Beck), Plymouth. Funeral Service Saturday, December 12th 11 AM at St. Michael Lutheran Church, 7000 North Sheldon Road, (at Warren) Canton, MI 48187. In lieu of flowers, heartfelt donations can be made to the National Multiple Sclerosis Society, Michigan Chapter, 21311 Civic Center Dr., Southfield, MI 48076-3900, as well as the American Lung Association, 1475 E 12 Mile road, Madison Heights, MI 48071. To share a memory, please use the Share a Memory on this web page.

On Tuesday, November 24, 2020, Jim was called Home at the young age of 37 while living in England. He was born in Dearborn, MI on May 19, 1983. Jim was the beloved son of Mark and Karen Peoples, loving brother of Laura (Andrew) Hopson and John... View Obituary & Service Information

The family of James Richard Peoples created this Life Tributes page to make it easy to share your memories.

Send flowers to the Peoples family.