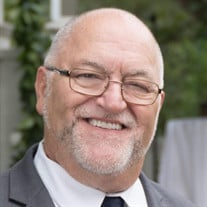 Si Nahra Born on May 8, 1950 in Bangor, Maine to John J. Nahra and M. Hilda (Fowler) Nahra, Si Nahra attended St. John’s Grammar School. He spent his high school years at Sacred Heart Juniorate, Ipswich, MA, anticipating a future as a seminarian for the Salesian order, a plan that changed. Si attended Colby College in Waterville, ME and graduated in 1972. A high number in the draft lottery spared him from being sent to Viet Nam. After graduation, he worked as a researcher for the State of Maine; his work there, conducting Medicaid research, let him discover his interest in large-scale health data and analysis. He found the field compelling enough to motivate him to start on a path of graduate study to enhance his expertise. With that plan in mind, Si moved to Michigan for four years of advanced study at Michigan State University from 1973-1977. After completing the research required to write his dissertation, he earned his Ph.D. in Political Science in 1985. While working on that degree, he moved to the Detroit area where he worked at the Detroit Area Health Council, at the same time lobbying the legislature in Lansing on behalf of the uninsured. For eight years Si served as Director and Vice-President of that council. While working on efforts of that kind, Si met and fell in love with the woman who would become his partner in work and in real life for the rest of his days. In 1983 he married Judy Mardigian, and together they soon built their home in Plymouth, MI. Judy shared Si’s interest in the health data field in general. More specifically, the couple shared a lively interest in starting a business of their own, with an eye to creating innovative services built from medical claim databases. Through their combined efforts, they founded Health Decisions, Inc. a company that survived for thirty-four years; more remarkably, it remained relevant and survived the digital revolution, an accomplishment that made Si proud, as he said during the last days of his life. That company held to the personal values of its two founders who always served as mentors to their employees, in whom they maintained a personal interest. More business opportunities presented themselves. Si served as a founding partner in 2005 of Part D Advisors, and in Accumulation Technologies, LLC. Along with John Eggertsen, Bruce Liebowitz, and Pat Coleman, Si worked in a close and productive collaboration that resulted in enduring friendships and other significant outcomes. Taken together, Si’s work in his own company and in these related ventures, his efforts radically transformed business practices with respect to health care. His efforts helped transform the way employers evaluate the health care they offer, and ways in which various payers may be held accountable. Si and Judy’s family life together was marked by shared interests and shared love. The kind of family that enjoyed each other’s company at family dinner every single day, they also created a bond through their interest in sports. Lifelong Michigan State supporters, following Si’s example they cheered at games for decades. But Si also cheered for his children’s efforts: he coached Charlie’s basketball team, attended countless games in baseball, and never missed a swim meet to cheer on his daughter Sandy. Their family looked forward to annual vacations, always spent in a place Si called “up North,” Michigan’s Leelanau Peninsula. In fulfillment of a lifelong dream, in 2016 Si and Judy built a home together in Omena, the place he loved best. There, Si particularly enjoyed walking Omena Point and enjoying their beach on Omena Bay. Si died a happy man, having encouraged his children with the words, “Follow Your Bliss,” and having lived to see that they had learned that vital lesson. Si is survived by his wife Judy Mardigian; son Charlie Nahra; daughter Sandy Hopwood (husband Jonathan Hopwood); sister Nancy Nahra; brother-in-law Willard Sterne Randall; brother Frank St. Lawrence; sister-in-law Patty St. Lawrence; sister-in-law Amy Hecht; brother-in-law Paul Hecht; sister-in-law Carol Lienhardt; brother-in-law George Mardigian; nephew Adam Lienhardt (wife Megan Lienhardt); niece Lucy Randall (husband Joe Jackson); niece Natalie Sinicropi (husband Pat Sinicropi); niece Taylor St. Lawrence. The family is hosting an online Zoom Meeting for Si’s memorial service. Friends are encouraged to sign on by 12:45 PM. The information is as follows: Topic: Si Nahra Memorial Celebration Time: Aug 30, 2020 01:00 PM America/Detroit Join Zoom Meeting https://us02web.zoom.us/j/82076280392?pwd=cHpncDhFWFJ0V3VXQnBDNnQyZEU1QT09 Meeting ID: 820 7628 0392 Passcode: sinahra In lieu of flowers, donations may be made in Si’s memory to the Leelanau Conservancy, https://www.leelanauconservancy.org/donate/. To share a memory, please use the share a memory tab on this webpage.

The family of John Si Nahra created this Life Tributes page to make it easy to share your memories.

Send flowers to the Nahra family.