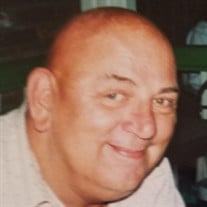 Kenneth “Kojak” Dabelstein, age 77 of Garden City died peacefully on May 19, 2021 with his wife Linda and family at his side. He owned Ken’s Country Produce in Westland since 1974 where he enjoyed selling the best flowers and garden needs. He started out selling vegetables on Detroit’s East side until settling in Westland. Ken felt that this was his calling in life and was proud of all he accomplished. Ken worked hard but still took a few months to enjoy his second home in Naples, Florida where he enjoyed the sunsets, fishing, boating and his annual swamp buggy races. He was especially grateful to get to know his oldest grandson, Jason Graham and his young family during the last few years of his life. Ken is survived by his wife Linda Torni together for 30 years. He leaves seven children, June (Ron) Lothamer, Wanda (Kevin) Graham, April (Steve) Shepler, Kevin (Carrie) Dabelstein, Dale and Erik Dabelstein. He will be reunited with his beloved daughter Anita. He was the stepfather of Tonya and Judy Whidden, the late Jimmy, the late Joanie and the late Tommy. Proud grandfather of 17. He is survived by siblings Leo (Sally) Dabelstein, Fred and Anne; sister-in-law and friend Patty (Mike) Camp. Ken lived in Garden City for the last 30 years. He enjoyed looking out his window, watching all the birds that came to visit at sunset. He lived by his motto, “Work smart, not hard”. Visitation Tuesday, June 1st 2-8 PM at Vermeulen-Sajewski Funeral Home, 980 N. Newburgh Road (between Ford Road and Cherry Hill) Westland. Funeral Service Wednesday, June 2nd 11 AM at the funeral home. Entombment Naples Memorial Gardens in North Naples, Florida. Memorial contributions may be made to Veterans Haven, Inc. 4924 S. Wayne Road, Wayne, MI 48184. To share a memory, please use the Share a Memory tab on this web page.

Kenneth &#8220;Kojak&#8221; Dabelstein, age 77 of Garden City died peacefully on May 19, 2021 with his wife Linda and family at his side. He owned Ken&#8217;s Country Produce in Westland since 1974 where he enjoyed selling the best flowers... View Obituary & Service Information

The family of Kenneth E. Dabelstein created this Life Tributes page to make it easy to share your memories.

Send flowers to the Dabelstein family.