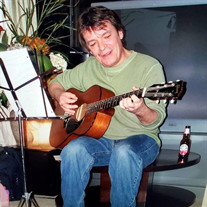 Kevin Pyle passed away unexpectedly over the Christmas holiday. Kevin was a cherished son, brother, uncle, cousin, and most notably, a loving father. He was kind, spirited, and utterly authentic, always marching to the beat of his own drum. His wit, irreverence, and zany sense-of-humor entertained everyone who interacted with him, and his playful heart lifted the hearts of many. Kevin spent his early childhood in Detroit, where he cultivated a love for sports and music that defined his later adulthood. As a boy, he collected and traded baseball cards and avidly followed all of the Detroit teams. In adolescence, Kevin was captivated by rock-and-roll and spent many years developing his natural talent as a musician and honing his guitar ability until he became skilled enough to play professionally. In addition to jamming to heavy rock, he could sing a ballad that pulled your heartstrings. Kevin paid it forward by sharing his musical talent with others, teaching many the art of the guitar. He was a member of several bands that played at popular clubs throughout the area, and he developed deep, long-term relationships with other musician friends who were a very important part of his life. Professionally, Kevin landed in IT and worked for Delta Dental for over 11 years, most recently in the position of Information Security Administrator. He loved working at Delta and felt part of a world-class team there. He often spoke of his great respect and admiration for his manager and co-workers at the company. Another big part of Kevin’s world was his beloved cats, whom he treated like members of the family. But the light and joy of Kevin’s life was his daughter, Stephanie. He was happiest when he was with Steff or talking about her. He spoke so proudly of her resilience and strength of character, and did everything possible to be the most supportive and loving father he could be. In these few short paragraphs, it’s not possible to capture the uniqueness of Kevin, his irreplaceability, and the immeasurable imprint he has left on our lives. Rest in peace, our beloved Kev. Our love for you is eternal, and we will meet again. ------ Because of COVID, there will be no visitation or memorial service at this time. If you wish to be notified when the memorial is scheduled, please contact Laura Pyle at [email protected] If desired, a memorial contribution can be made to the Michigan Humane Society, one of Kevin’s favorite charities. To share a memory, please use the Share a Memory tab on this web page.

Kevin Pyle passed away unexpectedly over the Christmas holiday. Kevin was a cherished son, brother, uncle, cousin, and most notably, a loving father. He was kind, spirited, and utterly authentic, always marching to the beat of his own drum.... View Obituary & Service Information

The family of Kevin R. Pyle created this Life Tributes page to make it easy to share your memories.

Kevin Pyle passed away unexpectedly over the Christmas holiday....

Send flowers to the Pyle family.