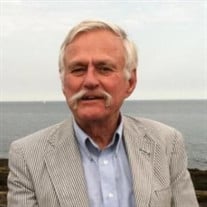 Lawrence True Harbeck died on November 4, 2020 in his Northville, Michigan apartment. He was born on September 3, 1924 in Bayonne, New Jersey, to Eugene Harbeck and his wife, Marion True. He grew up in LaGrange, Illinois, with his sister, Donna Jean (DJ), and graduated from LaGrange Township High School in 1942. Larry enlisted in the Army in 1944 and served as a combat infantryman in Patton’s Third Army. He fought in the battles of Northern France and the Rhineland and was wounded near Metz in November of 1944 by gunshot through his left arm that deflected off a lighter in his jacket pocket, preventing the bullet from penetrating his heart. As a wounded Army veteran, Larry was awarded the Combat Infantry Badge, the Bronze Star, a Presidential Citation to his unit, and the Purple Heart. After recuperating from his wounds, Larry attended the University of Michigan and graduated in 1948 with a BS in Chemical Engineering. Later that year, he married Alice Winifred Huntington of Ann Arbor, Michigan, daughter of Albert Lord Huntington and his wife, Mary Bliss Hubbell. In 1954 he received his MBA. Larry spent his early career as a manager at Ford Motor Company in Dearborn, Michigan and later joined the University of Michigan as an Associate Research Scientist at UMTRI specializing in automotive engineering. He retired from U of M in 1986 and was given the title of Associate Research Scientist Emeritus by the University in 1989. Larry moved to Maine in 1989 and in 1990 he married Lisbeth Louise Hildebrandt Johnson, originally of Ann Arbor and a childhood friend of Larry’s first wife, Alice, who had died in 1973. Larry and Lisbeth lived happily among the wild turkeys and deer of Yarmouth, Maine until Lisbeth’s death in September of 2006. He remained in Yarmouth until October of 2019 when he moved back to Michigan to be closer to his daughters Winnie and Mary Alice. In the years after his retirement, Larry pursued lifelong interests in engineering and science, writing articles, and developing inventions. He loved to sail and spent many days (and nights!) sailing around Higgins Lake. Larry was preceded in death by his parents; wives Alice Huntington and Lisbeth Johnson; his sister Donna Jean Harbeck and her husband Harold Gregg; stepson Phillip Johnson; stepdaughter Gail Johnson Munson; and step-grandson Jeremy Johnson, son of Jot and Melinda Johnson. He is survived by his daughter Winnie Tuthill of Springfield, Illinois; daughter Mary Alice (Greg) Wiland of Plymouth, Michigan; granddaughter Alice (Ryan) Bailey; and great granddaughter Cody Elisabeth of Phoenix, Arizona. He is also survived by his wife Lisbeth’s children and grandchildren. Lisbeth’s two daughters and their families - Louise Balligan and her daughter Lisbeth, along with daughter Marjorie (Robert) Solomon and their sons - all live on the east coast and visited regularly with Larry in Maine in the years after their mother’s death. As he began to experience health and memory issues, they were extremely generous in helping him and in their frequent discussions with Winnie and Mary Alice. ‘Uncle Larry’ will be missed by numerous nieces and nephews, ‘Harbs’ by his friends and son-in-law, and ‘Daddy’ by his daughters. He was a gentleman, a scholar, a scientist, and a teacher. He taught us to be curious, cautious, kind, and how to laugh at ourselves and the foibles of life. He will leave a notable void where there was once laughter and life, but he will live forever in our hearts. Larry received wonderful care from Bay Square of Yarmouth, Maine, and Anthology of Northville, Michigan during his final years. His family is more than grateful for the kindness, attention, and empathy he and his daughters received. Per his wishes, there will be no memorial services held. The family is being served by Vermeulen-Sajewski of Plymouth. Donations may be made to St. Jude’s Children's Research Hospital, 501 St. Jude Place, Memphis, TN, 38105. To share a memory, please use the Share A Memory tab on the web page.

Lawrence True Harbeck died on November 4, 2020 in his Northville, Michigan apartment. He was born on September 3, 1924 in Bayonne, New Jersey, to Eugene Harbeck and his wife, Marion True. He grew up in LaGrange, Illinois, with his sister, Donna... View Obituary & Service Information

The family of Lawrence True Harbeck created this Life Tributes page to make it easy to share your memories.

Lawrence True Harbeck died on November 4, 2020 in his Northville,...

Send flowers to the Harbeck family.