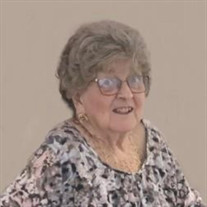 Lambert, Lila, age 89 of Dearborn Heights, MI passed away on April 18, 2022. The Funeral Service will be held Monday, April 25th at Conkle Funeral Home, Speedway Chapel, 4925 W. 16th Street, Speedway, IN 46224. Visitation will be held Sunday, April 24th 3-8 PM at the funeral home in Indiana. The burial will be held on Monday, April 25th with a service beginning at 10 AM then a procession to Floral Park Cemetery to her final resting place. Lila was born in Indianapolis on March 29, 1933. Lila graduated from Washington High School. Lila was married to Harold Lambert on September 26, 1953. They were married for 53 years, until Harold’s passing in 2006. Lila most recently worked at Habegger Corporation and enjoyed her time there before retiring in 2010. For anyone who knew Lila, bowling was a big part of her life. Lila was a member of the “Speedway Sports Hall of Fame. She also represented the USA in the “International F.I.Q.” competition in Caracus, Venezuela. The USA won the “Gold Medal” against many teams from all over the world. Lila would say this was her biggest achievement in her lifetime-distinguished Bowling career. Lila is survived by her son- Scott, sister- Betty Gentry, grandchildren-Laura Lambert, Jonathan Lambert, Christina Osadchy, Rick Howard, and Cory Howard. Lila also had 8 great grandchildren. She truly loved her family so much. Lila is preceded in death by her husband- Harold, daughter- Pam Howard, parents-Opal & Dale Littrell, brothers and sisters, Roland Littrell, Robert Littrell, Delores Baxter, and Dorsey Littrell. In lieu of flowers, memorial donations may be made to the family c/o Scott Lambert, 1779 Stonebridge Drive North, Ann Arbor, MI 48108. Local arrangements by Vermeulen-Sajewski Funeral Home, Plymouth. To share a memory, please use the Share a Memory tab on this webpage.

The family of Lila M. Lambert created this Life Tributes page to make it easy to share your memories.

Lambert, Lila, age 89 of Dearborn Heights, MI passed away on...