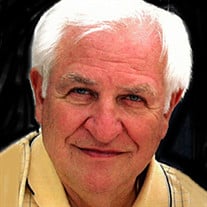 Louis John Chiatalas, age 86, passed away at his home on May 4, 2021. His wife of 64 years, Marguerite E. (Dowd) was by his side. Louis is also survived by his five children, John (Nancy) Chiatalas, Tom (Cindy) Chiatalas, Jamie (the late William) Claypool, Mia (David) Donoghue, Pericles (Kim) Chiatalas, and many Grandchildren and Great-Grandchildren. He was predeceased by his parents, John and Styliane Tsiatalas and his five siblings. “Lou”, as he was affectionately called by many, never forgot his childhood and life in Greece and remained close with his Greek relatives and maintained the ancestral home in Rendina that he was born in. Lou was blessed with high mechanical aptitude and took a keen interest in building things with the village carpenter, even before immigrating to Bay City, Michigan with his family in 1947. He loved understanding how things worked. He learned to speak more English while going to the movies near his family’s restaurant and eventually spoke with no hint of an accent. He opened and closed the family diner daily while earning high marks at Bay City Central High School while also serving on the student body Supreme Court. He excelled in sports as a two-way football player for the vaunted Wolves as well as basketball and track. He enjoyed a job well-done, friendly athletic competition after a day’s work and good food, lots of it. Lou loved automobiles and won a competitive scholarship to study engineering at General Motors Institute of Technology (now Kettering University) sponsored by the Bay City Chevrolet Plant. He made the most of his training at GM then in 1967 moved his family downstate to join Ford Motor Company where he progressed in its managerial ranks. He undertook foreign assignments in several countries after retiring from Ford that landed him in Pakistan, Japan, China and Australia. He also restored two antique automobiles with his sons’ help that are maintained proudly to this day. Together, Louis and Marguerite instilled their love of family, Church, heritage, and travel in their children. The Church was very important in Lou’s life and was never far from his thoughts. He was President of the St Demetrios Greek Orthodox Church in Saginaw MI before moving in 1967 and setting up roots in Plymouth MI, where Lou and his family became members of the St Nicholas community in Ann Arbor MI. He became President for several years in the 70s where Lou and his family attended every Sunday. Lou helped lay the groundwork for the successful parish Greek festivals of 70s as well as the expansion of the former church on Main Street. Lou’s passion for his Church, and his village Rendina were instilled in his children and inspired them in turn to be leaders of the Church, builders of our new church and festival, and rebuilding the ancestral home in 2000 like an episode of “This Old House”. Lou was able to do so many things, he was that low percentage of engineers that actually had street smarts and not just book smarts. Lou could make or fix anything, whether it was metal, wood (his favorite), or a furrowed brow of one of his kids. He planted every tree at the home in Plymouth as well as countless expansion projects, not only at his home, but those of his children as well. He never stopped trying to help wherever, whenever he could. Lou’s job took him to practically every corner of the Earth, which in turn he was able to take his family to many of them. These trips allowed for a true hands-on view of the world and a perspective that you cannot get from a newspaper or classroom. This was not lost on his children, and they carry these lessons and memories forever. Lou’s biggest joy in life was his family and sharing his life with them. Lou made it a point to make sure his siblings and families were seen regularly and that his family and extended families were interwoven into a wonderful fabric of love. His life well-lived set an everlasting impression on them that will be held close to their hearts for as long as they live, and in turn passed on to the generations to come. Everlasting be the memory of dear Lou, a loving husband, son, brother, father, Grand and Great Grandfather and friend to many. You were loved so very much and will be painfully missed. Visitation Thursday, May 6th 4-8 PM at Vermeulen-Sajewski Funeral Home, 46401 Ann Arbor Road West, (btwn Sheldon & Beck) Plymouth. Trisagion Service 7:30 PM. In state Friday, May 7th 10:30 AM until the 11 AM Funeral Service at St. Nicholas Greek Orthodox Church, 3109 Scio Church Road, Ann Arbor, MI 48103. Interment Bethlehem Cemetery. Memorial contributions may be made to the St. Nicholas Iconography fund c/o St. Nicholas Church. To share a memory, please use the Share a Memory tab on this web page.

Louis John Chiatalas, age 86, passed away at his home on May 4, 2021. His wife of 64 years, Marguerite E. (Dowd) was by his side. Louis is also survived by his five children, John (Nancy) Chiatalas, Tom (Cindy) Chiatalas, Jamie (the late William)... View Obituary & Service Information

The family of Louis J. Chiatalas created this Life Tributes page to make it easy to share your memories.

Louis John Chiatalas, age 86, passed away at his home on May...

Send flowers to the Chiatalas family.