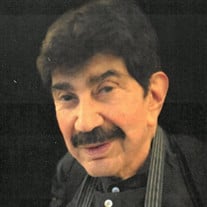 Mr. Louis P. Ferris, Jr. went to be with His Lord, Jesus Christ on April 20th, 2022, in Ann Arbor, Michigan at the age 79. Louis is survived by his children: Louis P. Ferris, III. Robin Marie Ferris. Children: Alexa-Rose Marie Ferris; Nicholas Anthony Ferris. Cindy Ann Cunningham (Jack Cunningham). Children: Jessica Marie Cunningham; Mason James Cunningham. Allisha Kathleen Burnsworth (Randy Burnsworth). Children: Emma Rose Burnsworth; Joseph Thomas Burnsworth. Jennifer Ferris (Brian Close). Louis was born on March 29th, 1943, to Louis P. Ferris, Sr. and Rose Anna Ferris. Louis was raised on Congress Street near the railroad tracks in Detroit, with his beloved sister Theresa Marie Eubanks (Ferris). Louis’ passion, first and foremost, was his family, friends, and beloved German Shepherds. His second passion was business. His main talents centered around finance and sales. He successfully built up Great Lakes Central Railroad which is now Michigan‘s longest railroad, Federated Service Solutions a fantastic enterprise solutions company, and Ferris Management which is the home of many happy livestock and organic farming. No one could calculate an interest rate or close a deal faster than Louis. As much as he treasured his businesses, he was more gratified by spending time with his family and friends. Sunday dinners centered on good food, good wine, and a lot of laughter. Louis was most energized by his non-profit charity, The Good Shepherds. His desire is to feed the hungry in Washtenaw County and beyond. He had a love for helping others, especially those who are less fortunate. Louis’ generosity will be kept alive through the continuous operation of The Good Shepherds. A Memorial Service will be held to honor Louis on Thursday, April 28th, 2022 10:30 am at The Basilica of St. Mary (18200 Merriman Road, Livonia, Michigan 48152). In lieu of flowers, donations may be made to either The Good Shepherds (https://paypal.com/donate/?hosted_button_id=3JJNEV7YAW33E) or The Salvation Army in Louis' honor (https://centralusa.salvationarmy.org/emi/)

The family of Louis Patrick Ferris Jr. created this Life Tributes page to make it easy to share your memories.

Send flowers to the Ferris family.