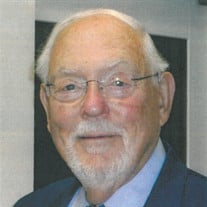 Campbell, Malcolm David, D.D.S. , September 23, 1926-June 29, 2016. Beloved husband to the late Janet Campbell. Loving father to Mary Catherine, David (Patty), Elizabeth (Robert), and Rev. Douglas (Rev. Emily). Brother-in-law to Mary C. Lukens. Loving Grandfather to Malcolm, John, Scott, Alex, Daniel, Sarah and Hannah who brought much joy to his life. Visitation Friday July 15 5-8 PM at Vermeulen-Sajewski Funeral Home, 46401 W. Ann Arbor Road, Plymouth. Memorial Service at First Presbyterian Church of Plymouth, 701 Church St., Plymouth, MI 48170. In lieu of flowers, the family requests that memorial contributions may be made to the First Presbyterian Church of Plymouth or U of D Mercy School of Dentistry, 2700 Martin Luther King Jr. Blvd, Detroit, MI 48208, attn: Thomas Sklut for the M. David Campbell Memorial Fund for Special Needs Patients. David was a first generation U.S. citizen. He served in the U.S. Navy 1944-1946. After the war he went to Wayne State University and graduated in 1955 from the University of Detroit, School of Dentistry. He established a private practice in Dearborn, Michigan and married Janet D. Cauhorn in 1958. David was active in numerous dental organizations and professional activities and was asked to become a member of the Pierre Fauchard Academy. Pierre Fauchard Academy is a service organization of dentists whose members are selected for their dedication to the art and science of density and their contributions to its professional literature. David served as President of both the National and International Pierre Fauchard organizations. He taught at University of Detroit and University Michigan in the School of Dentistry. In addition to his leadership skills and being a mentor, he developed a curriculum for continuing education in the field of geriatric dentistry which University of Detroit adopted. He was an active member of his community. He was a member of the Rotary Club of Plymouth, volunteered in the Dearborn Public Schools and Plymouth Canton Community School System. He served his community as a member of several Boards, including the Board of Trustees for Help Source and Huron Services for Youth. In addition, he served as a 4-H Advisor for Wayne County. His duties included teaching 2nd grade little girls how to make Swanky Frankies. A lesson none of the little girls have ever forgotten. He served on several different committees in the First Presbyterian Church of Plymouth. He was an elder in the church, but not a member of the choir, for which all members were thankful!

The family of Malcolm David Campbell, DDS created this Life Tributes page to make it easy to share your memories.

Send flowers to the Campbell family.