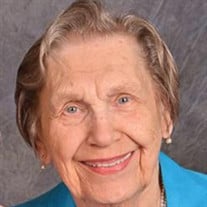 Marian Mytych, age 94 passed away on August 2, 2021. She was born on May 24, 1927 in Detroit, Michigan to the late John and Mary Banach. The oldest of three children, Marian grew up in the shadows of the depression and understood at an early age the importance of God being first in one's life. She was determined to lead by example, and has been an inspiration to many, young and old. Family and her Polish heritage were important to her. As a member and secretary of the SS. Peter & Paul Altar Society, she helped in making pierogi for the church for numerous years. She married the love of her life the late Frank Mytych (World War II Veteran) in 1947 and together they had four children: Karen (Edward) Bulmanski, Susan (James) Gonsler, Roy (Gloria) Mytych, and James (Agnes) Mytych. In addition to her children, she is survived by nine grandchildren: Brenda (John) Bagazinski, Wendy (Brian) Beam, Kimberly (Lee) Monroe, Megan Monroe, Clinton Mytych, Clayton (Cassanda) Mytych, Melissa, Eric and Stephen Mytych. She is adored by her great-grandchildren: John, James, Matthew, Brooke, Tara, Frank, Clare, Paul, Aiden, Violet, Alfie, Miriam, Lilyana, and Silas, and her siblings: the late John (Betty) Banach, and the late Patricia (Norman) Bylow. Marian enjoyed hosting family gatherings and keeping in touch with family members. She loved baking, and making her famous Chex Mix and meatballs. She also crocheted countless afghans that she gave as special gifts. Marian will be forever remembered for her ability to make everyone feel special; she was always there to lend an ear and provide support. She never forgot any family member's birthday or anniversary and wrote the most beautiful heartfelt notes in every card she sent. She had a beautiful smile and a generous spirit. She will be dearly missed. A Funeral Mass was held on August 9th at St. Mary, Cause of Our Joy Catholic Church, 8200 N. Wayne Rd, Westland, Michigan. In lieu of flowers, the family is requesting memorial donations in Marian's name to be made to: Angela Hospice, 14100 Newburgh Road, Livonia, MI 48154. Thank you for your continued love and prayers for our family. Arrangements entrusted with Vermeulen-Sajewski Funeral Home, Westland. To share a memory, please use the Share a Memory tab on this web page.

Marian Mytych, age 94 passed away on August 2, 2021. She was born on May 24, 1927 in Detroit, Michigan to the late John and Mary Banach. The oldest of three children, Marian grew up in the shadows of the depression and understood at an early... View Obituary & Service Information

The family of Marian Lorraine Mytych created this Life Tributes page to make it easy to share your memories.

Send flowers to the Mytych family.