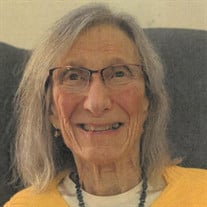 Miranda Francis (Sukany) Lockhart, 94, died peacefully on 6 March 2022 surrounded by family in Plymouth, Michigan. Miranda was born on 16 January 1928 in Flint, Michigan, the daughter of Frank and Josephine (Durdak) Sukany from Czechoslovakia, and with her identical twin sister, Milana, was the oldest of five children. She grew up on Flint’s north side in an extended family of Czech cousins, learned English as a second language, was active in Sokol gymnastics and the ZCBJ Lodge Nova Cechie, graduated Flint Northern High School, and earned an associate degree in office management at Flint Junior College. In 1951, Miranda married Gerald Lockhart in Flint and they raised two sons together in Birmingham, Michigan. Miranda was an accomplished businesswoman. Her career began as a clerk for the City of Flint after graduating from college and culminated as Office Manager for Miller, Canfield, Paddock, and Stone law offices while raising her sons. She enjoyed traveling. When Gerry took an assignment at GM-Opel Automobile, they moved their family to Germany. She traveled throughout Europe and reunited with her old-country Czech relatives in what is now the Czech Republic. Miranda studied art and weaving at the Cranbrook School of Art in Bloomfield Hills (she was classmates with yet-to-be-discovered Barbra Streisand). Her eye for beautiful design and artwork was keen, and she held a deep affection for classical music both on piano and in ensembles (especially performances by her children, nieces, and nephews). After retiring in 1992, Miranda and Gerry designed and built a beautiful log home in Black River, Michigan. Throughout life, Miranda shared an inseparable love with her twin, Milana, that led both to raise their families together and speak with each other daily. She will be truly missed by her family and friends. Miranda is survived by her sons Marek Lockhart and Derek (Jean) Lockhart; one sister Josephine (Daniel) Elliott; three sisters-in-law Joanne Sukany, Pamela Sukany, and Betty Lockhart; thirteen nieces, nephews, and their spouses; a large crew of great-nieces and -nephews; and by several cousins. She was preceded in death by her dear husband Gerry; her beloved parents and in-laws Lela and Alfred Lockhart; twin sister Milana Carlson and brothers Thomas and Frank Sukany; sister-in-law Joanne Lockhart and brothers-in-law Kenneth Lockhart and Boyd Carlson; and by her dear niece Patricia (Carlson) Aiello. Cremation arrangements have been entrusted to Vermeulen-Sajewski Funeral Home in Plymouth. A memorial will be arranged later in 2022. Those wishing to honor Miranda’s memory with a charitable gift would be encouraged by her to donate to Lymphoma research at the American Cancer Society in memory of her and Gerry (who died from Non-Hodgkin’s Lymphoma). To share a memory, please use the share a memory tab on this webpage

The family of Miranda Francis Lockhart created this Life Tributes page to make it easy to share your memories.

Send flowers to the Lockhart family.