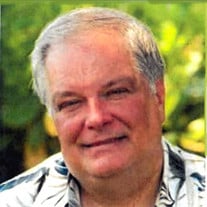 Raymond Joseph Rolak, 70, passed peacefully in his home on January 8, 2022 in Canton, MI. He is preceded in death by his parents, John and Angela Rolak. He is survived by his son, Josef (Taylor Steele) Rolak and granddaughter, Willow Rolak. He is also survived by his siblings, Rita (predeceased Stanley) Moraniec, Ronald (Gloria) Rolak, twin sister Rayneld (Walter) Johnson and many nieces, nephews and cousins. Born on March 11, 1951, Raymond was raised in northwest Detroit, educated at St. Scholastica elementary, Cooley HS (1969), and Wayne State U. (1973). Reflecting his lifelong love of learning, Ray attained additional certifications including, Peer Support Counseling, Mastery of Forestry Management and Diplomat of Aviation Safety. During early professional years, Ray worked for the Detroit Parks & Recreation Dept. in program development and coaching. Athletically, he played and coached hockey and baseball in high school, college and later for the semi-pro baseball team, Inland Tool Manufacturing (ITM). Following, Raymond worked for Delta airlines for twenty-nine years as a flight attendant and training manager and then retired. Additionally, Raymond developed ROLCO, a sports broadcasting business and was active in media production, sports commentating and planning of events such as the Silver Sword Classic basketball tournament in Maui, HI. He also served as president of the Detroit Sports Broadcasting Association. Raymond remained engaged in writing, speaking, filmmaking and event planning for the rest of his life and continued his lifelong passion for sports through these endeavors. As a talented creative writer and speaker, Raymond developed and presented numerous lively sports themed enrichment programs at the Plymouth District Library such as Town Baseball and Baseball in the Movies. He also authored many sports related articles that were published in newspapers, magazines and digital publications. And he wrote the foreword for the book, Tribes: An International Hockey History by Darril and George Fosty. Proud of his heritage, Raymond spearheaded program events at the Detroit Tigers Polish-American night and Polish-American Heritage Day at Eastern Michigan University. Related to coaching, Raymond was invited to teach baseball skills as part of a 2016 summer program for youths in Poland. One purpose of the program was to ignite interest in baseball in anticipation of the sport rejoining the 2020 Summer Olympic Games. Raymond said the experience was a special highlight for him. Additionally, in the early 1990s Raymond was Chairman of the Board of the National Polish-American Sports Hall of Fame and remained on the Sports Panel Council till current times. Early in his career while working for Detroit Parks & Recreation, Raymond was selected to have a role in the TV movie, One in a Million: The Ron LeFlore Story. Interest in the film industry resurfaced during later years exemplified through his co-production of the movies, Get a Job and Kuleana Maui, filmed and produced in Maui, HI. Ray often wore a Hawaiian shirt to reflect his affection for the aloha spirit. Ray lived a full life rich in experiences. Through his airline work, Ray enjoyed world travel, visited every continent and embraced many cultural traditions and cuisines. Loving people, Ray developed wonderful long lasting friendships and touched the lives of many. Appreciating the value in others, Ray coached and pushed for their best. And he recognized others’ achievements. As an author, producer, filmmaker and speaker, his stories and entertainment offered unique, colorful and spirited experiences. Raymond always expressed gratitude to those who shaped his life and made his life journey so wonderful. Family and friends may pay tribute at Gathering Saturday, February 26th 10 AM until the 11 AM Funeral Mass at St. John Neumann Catholic Church, 44800 Warren Road, Canton, MI 48187. In lieu of flowers, memorial contributions may be made to Plymouth District Library, plymouthlibrary.org or National Polish-American Sports Hall of Fame, PolishSportsHOF.com. To share a memory, please use the Share a Memory tab on this web page.

Raymond Joseph Rolak, 70, passed peacefully in his home on January 8, 2022 in Canton, MI. He is preceded in death by his parents, John and Angela Rolak. He is survived by his son, Josef (Taylor Steele) Rolak and granddaughter, Willow Rolak.... View Obituary & Service Information

The family of Raymond J. Rolak created this Life Tributes page to make it easy to share your memories.

Raymond Joseph Rolak, 70, passed peacefully in his home on January...