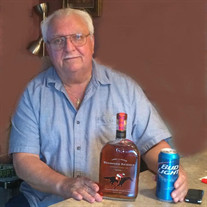 Richard Bellamy, 74, of Westland, died Sunday, October 18th at his home. Born on December 15, 1945 in Saratoga Springs, NY to the late Earl Sr. and Katherine Bellamy, he attended local schools. After graduating from Troy High School, Rich began his career at Ford Motor Company. He worked at the Green Island Plant in South Troy from 1971 until 1985, when he relocated to Michigan. Throughout his career, Rich held many different positions within Ford Motor Company. He was a well-respected UAW committeeman for several years. He married his wife, the former Kathleen Payne Griswold, on August 31, 1979. Together, they built a wonderful life together. As self-proclaimed “Parrot-heads” and avid music lovers, Rich and Kathy enjoyed live music and attending concerts, having seen Jimmy Buffett perform several times. Despite his quiet demeanor, Rich was the life of the party. His ability to make those around him feel welcome with a drink, a meal, or a simple conversation is something his family will remember fondly. He enjoyed entertaining friends and family with his wife in their home and was infamous for his creative culinary skills. A self-taught master carpenter, Rich had the incredible ability to build anything with his bare hands. He was proud to show off his work, especially the impressive bar he built in his home. After his retirement in 2008, Rich spent a great deal of time maintaining the best yard on the block, which included his impressive vegetable and herb gardens and meticulously well-kept pool. He had a great attention to detail and took great pride in his home. His grandchildren in particular will miss his storytelling, his incredible sense of humor, and the best homemade pizzas. Besides his parents, Rich was predeceased by his beloved cat, KoKo. In addition to his wife, he leaves his siblings; Earl (Mary), Gary (Sue) and Laurie (Frank); children,Richard Bellamy II (Jane), Robert Bellamy (Cathy) .; his stepsons, Jim Griswold, Brian Griswold, and Scott Griswold; 11 grandchildren, Richard Bellamy III, Meghan Kirby, Ryan Bellamy, Brittany MacNicol, Colin Griswold, Julian Griswold, Caitlin Bellamy, Andrew Bellamy, Chad Bellamy, Branson Bellamy, and Molly Griswold; and 7 great-grandchildren. He also leaves two former daughters-in-law, Debbie Bellamy and Guin Griswold. In addition, he will be missed and remembered by countless friends and former colleagues. Per his wishes, there will be no services. A memorial celebration will be planned for next summer. Keeping with his love of feeding people, in lieu of flowers, donations in Rich’s memory may be made to Gleaners Community Foodbank of Southeastern Michigan, 2131 Beaufait, Detroit, MI 48207. Donations can also be made via their website, www.gcfb.org. Arrangements entrusted with Vermeulen-Sajewski Funeral Home, Westland. To share a memory, please use the Share a Memory tab on this web page.

The family of Richard Leon Bellamy created this Life Tributes page to make it easy to share your memories.

Send flowers to the Bellamy family.