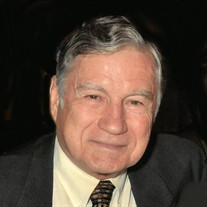 Not sure what to send?

DeLosh, Jr. Robert Gordon, March 26, 2022, age 87 of Ann Arbor and Plymouth. Loving fiancé and best friend of Kate Rosevear. Dear father of Angela (Joe) Brough and Thomas DeLosh. Proud grandfather of Christine (Zach) Sperry, Joseph (Madeline) Robinson, Ellen (Jake) Wilson and Evan DeLosh. Preceded in death by Freda (nee Johnson), his beloved wife of 53 years, by his mother, Emily Kolaja MacDonald and stepfather Robert MacDonald, and by his father, Robert Gordon DeLosh, Sr. Born in Detroit, Michigan, Bob grew up in Millington and later in Reed City, Michigan. He was a high school and college athlete, an avid bicyclist, an outdoorsman, a Boy Scout leader and a serious photographer of nature. Bob graduated from the University of Michigan with a BS in Mechanical Engineering. Later, while working full-time at Ford Motor Company and raising a family, he graduated with a PhD in Physics from Wayne State University. Bob retired in 1996 from Ford Motor Company as Director of Powertrain Engineering. A celebration of Bob DeLosh's life will take place on Saturday, May, 21, 2022 with a gathering from 10 AM until the 11 AM service at Vermeulen-Sajewski Funeral Home, 46401 Ann Arbor Road, Plymouth (between Sheldon and Beck). Donations in Bob's memory can be made to the Rotary Club of Plymouth A.M. Foundation, 650 Church Street, Plymouth, Michigan 48170 or to the Michigan Philharmonic at 650 Church Street, Plymouth Michigan 48170. Donations to the Rotary Club will be directed towards the completion of a water well project to serve the school and neighboring communities of Bob's favorite village in the Maasai Mara, Kenya, Africa. To share a memory with the family please use the "Share a Memory" tab on this webpage.

The family of Robert Gordon DeLosh Jr. created this Life Tributes page to make it easy to share your memories.

Send flowers to Robert's Gathering of Family and Friends.