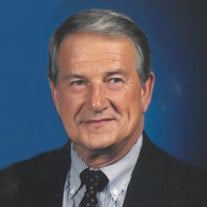 Robert “Bob” Haarala died Wednesday, March 2, 2022, in Livonia. Beloved husband of Karolyn Loving father of Troy (Jeree), Brett (Lori), Bruce (Edie), Dan (Jennifer) and Kara Proud grandfather of Derek, Brandon, Ryan, Kyle, Jessica, Jack, Kayla, Eric, Alec, Brooke, Elyse, Summer and Samantha. Proud great grandfather of Parker, Brayden, Vallen. Bob was born December 15, 1937 in Bruce Crossing, MI to Laurie “Tom” and Florence (Gerber) Haarala. Bob graduated from Ewen-Trout Creek High School and afterward enrolled at Northern Michigan University in 1955. During college Bob worked summers for the US Forest Service. After graduating with a BS degree in Math in 1959, Bob took a position as a a Math Teacher at Brake Jr High in Taylor. In 1961 Bob met Karolyn Mueller of Tecumseh (on a blind double-date at a drive-in) and was married that same year. Together they raised five children. Bob completed his Masters Degree in secondary education in 1965 at Northern Michigan and had a distinguished 39 year career in the Taylor schools as a teacher, Principal, and Assistant Superintendent. Bob’s spirit, humor and drive made him a very popular and effective educator for both students and coworkers throughout his career. Bob was recognized with multiple awards for his impact on the schools and community. Survivors include his children: Troy (Jeree) of Trenton, Brett (Lori) of Framingham MA, Bruce (Edie) of Plymouth, Dan (Jennifer) of Livonia, and Kara Schroeder of Plymouth. Also survived by close family friend Ronny Fowler of Westland. Bob is also by survived by his siblings: Nina Humphrey, of Ewen, Jean (Martin) Keranen, of Land O'Lakes, Wis., Lawrence (Lynn), of Phelps, Wis., Thomas (Sharon), of Ontonagon, Mary (Duane) Leaf, of Bruce Crossing, and Ann Marie (Jeff) Haapoja, of Ironwood; Also by Karolyn's siblings: Gary (Maryann) Mueller, Chuck (Donna) Mueller, David (Carolyn) Mueller, Paula Mueller, MarySue Amas, Jana (David) DeJonge Randy Mueller, and Beth Corey. Bob is survived by numerous nieces and nephews and extended family members. Preceding Robert in death were his parents Tom and Florence. Bob touched so many people in his life, through his large family, his work as a teacher and administator to literally thousands of students and staff, and to the many people who were his close friends. Bob was known to all for his energy, drive, generosity and his unique sense of humor. Bob enjoyed the company of his relatives and many life-long friends with whom he kept in touch frequently . For the last 20 years Bob organized an annual golf tournament for friends and relatives that allowed distant family to regularly reunite. Bob was an excellent athlete playing baseball, basketball, and was captain of his high school footbal team. Bob enjoyed bowling and golfing throughout his life and enjoyed both for 50 years as a member of leagues formed by fellow Taylor Public School educators. From the times of Vince Lombardi and Bart Starr, Bob was an avid supporter of the Green Bay Packers. He also was a fan of University of Michigan sports and the Detroit Tigers, enjoying the highs and enduring the lows of those storied teams. Visitation Tuesday, March 8th 1 – 8 PM at Vermeulen-Sajewski Funeral Home, 46401 Ann Arbor Rd. W., (between Sheldon & Beck) Plymouth. In state Wednesday, March 9th 9:30 AM until the Wednesday 10 AM Funeral Mass at St. Mary Cause of Our Joy, 8200 North Wayne Rd, Westland, MI 48185. In Lieu of flowers the Haarala Family has indicated that memorial contributions can be made to the Robert Haarala Memorial Scholarship - to be awarded to a graduate of Taylor Public Schools who desires to become an educator. Checks should be made out to the Taylor Public Schools Foundation. Please include "Haarala Memorial Scholarship" in the memo line at the bottom of the check. Checks can be dropped off at the funeral home during visitation or mailed to: Taylor Public Schools Foundation 23033 Northline Rd. Taylor, MI 48180 Donations may also be made to Angela Hospice of Livonia. Angela Hospice, or Taylor Public Schools Foundation (Haarala Memorial Scholarship), 23033 Northline Road, Taylor, MI 48180. To share a memory, please use the Share a memory tab on this web page.

The family of Robert "Bob" Haarala created this Life Tributes page to make it easy to share your memories.