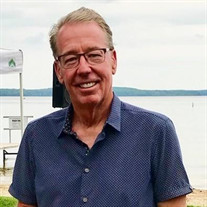 Robert James MacKenzie, age 61, left us unexpectedly on October 14, 2019. While our hearts are broken, we cherish the many memories we made with him and the lasting impact he had on so many lives. He connected to people through his warm smile and friendly demeanor that put others immediately at ease. He was quick to laugh and thoroughly enjoyed time with family and friends in Plymouth and in his second hometown of Harbor Springs. Robert, or Bob as he was known to most, is survived by the love of his life and wife of 30 years, Pam (nee Clark), and their three daughters who meant the world to him: Kylie (Jason) Sulen, Annie and Erin. He was incredibly proud of them and his light will continue to shine through all of them. Bob also is survived by his brother, David (Paula) MacKenzie and sister, Jan MacKenzie (Lara) as well as mother-in-law, Betty Clark and brother-in-law Doug (Margaret) Clark. Bob was adored by his niece and nephews: Jason, Andrew, Kenny, Maggie and Ian. His cousins in the Kay and Vince families were dear to Bob as was the special relationship he had with the Gothard family: Mark, Lori, Alex and Andrea. Bob was preceded in death by his parents, Donald and Janet MacKenzie; brother, Dan MacKenzie; and father-in-law, George Clark. Bob graduated from Plymouth Salem High School and Central Michigan University. He excelled in positions at Ernst & Young in Kalamazoo and Abraham Chevrolet in Miami before returning to his hometown of Plymouth to settle down and raise his family. After selling his stake in Briarwood Ford in Saline, Mich., Bob came out of early retirement for a “temporary” assignment assisting The Suburban Collection with the purchase of Flannery Ford. In the first six months of what turned into a 19-year assignment, Bob took what is now known as Ford of Waterford from being ranked 500+ in the nation to the Top 100. Ford of Waterford, currently ranked in the Top 20 Ford dealerships nationally, recently celebrated the grand opening of the all new Suburban Ford of Waterford facility, the company’s single largest construction project in its history. Although Bob was an accountant by trade, he wasn’t all about the numbers as evidenced by the fact he retained 19 original Flannery Ford team members since Suburban acquired the store 19 years ago. Over his tenure with The Suburban Collection, Bob played a major role in the overall growth of the company as his duties included not only overseeing operations at Suburban Ford of Waterford, but also Suburban Chrysler Dodge Jeep Ram of Farmington Hills, Suburban Chrysler Dodge Jeep Ram of Garden City and Suburban Honda. When not working on his metrics like a true CPA, he was spending time up north with family and friends. He and his family were avid travelers, often exploring the four corners of the world and nearly every continent. While Bob will be deeply missed, he has taught us how to live each day with kindness, generosity and true devotion to family, friends and career. We all love you Bobby Mac. A visitation is planned for Friday, October 18 from 4 p.m. to 8 p.m. at Vermeulen-Sajewski Funeral Home, 46401 Ann Arbor Rd. W., Plymouth, MI. In lieu of flowers, the family asks that donations be made in Bob’s name to the Live Like Max Foundation. To share a memory, please visit vermeulenfh.com

Robert James MacKenzie, age 61, left us unexpectedly on October 14, 2019. While our hearts are broken, we cherish the many memories we made with him and the lasting impact he had on so many lives. He connected to people through his warm smile... View Obituary & Service Information

The family of Robert James MacKenzie created this Life Tributes page to make it easy to share your memories.

Send flowers to the MacKenzie family.