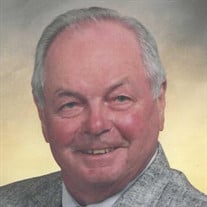 Stanley Edmund Snyder, 89 of Plymouth Township, MI passed away peacefully in the early hours of March 9, 2021. He had been living independently until being treated by hospice professionals for a few days at St. Mary’s Hospital in Livonia. Mr. Snyder is survived by seven children, James, Phillip (Laurie Kattuah), Michael (Steven Bair), Stephen, David (Jeri Thomson), Suzanne (Tom Bondy) and Joseph, and six grandchildren: Scott, Abigail, Elizabeth, Olivia, Christine and Nicholas. Stanley was preceded in death by his former wife Geraldine. Stanley is survived by sisters Bernadine (Miller), Karen (Spitzley) and Cynthia (Thelen). A father and husband, Stan Snyder was also a professional baseball player, a United States Marine, a Michigan State Police Trooper, and an insurance salesman. He eventually became a small business owner by forming the Arlington Insurance Agency in Livonia, which he later sold. During his lengthy retirement, Stan volunteered faithfully at St. Christine Soup Kitchen in Detroit and personally served many sick and shut-in seniors. He was a member of the Knights of Columbus, Cardinal Mooney & Monahan Councils in Redford & Livonia, and the Loyal Order of Moose Lodge in Northville. Stan was often seen at area golf courses (Glenhurst, Hilltop, Kensington) playing golf and raising hell in the clubhouse with friends Bud, Chuck, Lenny, Tom, Paul, Mike, Bill, Pat and Ray. He was a true nature lover and spent many enjoyable hours feeding and chatting with furry and winged friends, aka his beloved squirrels, chipmunks, bluejays and cardinals. Our Dad will be missed by more than just our Family! A private family service is planned for the Spring of 2021. Arrangements entrusted with Vermeulen-Sajewski Funeral Home, Westland. To share a memory, please use the Share a Memory tab on this web page.

Stanley Edmund Snyder, 89 of Plymouth Township, MI passed away peacefully in the early hours of March 9, 2021. He had been living independently until being treated by hospice professionals for a few days at St. Mary&#8217;s Hospital in Livonia.... View Obituary & Service Information

The family of Stanley Edmund Snyder created this Life Tributes page to make it easy to share your memories.

Send flowers to the Snyder family.