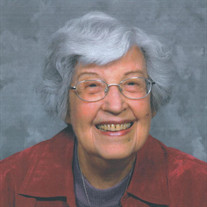 Bennett, Victoria (Vickie) Musson, age 103, of Plymouth passed away peacefully at home on September 22, 2020. Beloved wife of the late: Richard W. Musson (1942-1973) and Jack B. Bennett (1986-2009). Loving mother of Marilyn Musson Disbrow and Warren (Anne) Musson. Dear daughter of the late Fredrick and Mary (Meida) Leland. Proud grandmother of Mary (Ben) Kroeger, Kelly Bauschat, Kate (Stefan) Simonetti, and great grandmother of Emily Bauschat, Grayson Kroeger, Blake Bauschat and Sloan Simonetti. Vickie was born and lived in Detroit until 1942. She graduated from Wayne State University in 1939 with a Bachelors Degree in Teaching. She received her Master’s Degree in Guidance and Counseling from the University of Michigan in 1965. She was employed by the Detroit Public Schools (beginning in 1940) as a Social Studies Teacher and later as a Guidance Counselor at Cass Tech High School from 1966 until her retirement in 1982. During WWII she served in the Army Air Force Civilian Personnel Office in Laredo, TX where her husband Richard Musson was a tail gunner instructor. She was a 50 + year member of the U of M Alumni Assn., AAUW, Phi Kappa Phi, Alpha Sigma Tau Sorority, American Legion Auxiliary, and is listed in the Who’s Who of the Midwest 1978-79. Her love of grandchildren, great grandchildren and world travel were the highlights of her retirement years. A Memorial Visitation will be held Friday, October 2nd from 3-5 PM with a Memorial Service beginning 5 PM at Vermeulen-Sajewski Funeral Home, 46401 Ann Arbor Road West, (between Sheldon and Beck) Plymouth. Memorial Contributions may be made to St. John’s Episcopal Church, 574 S. Sheldon Rd., Plymouth, Michigan 48170, where Vickie was a long time member. To share a memory, please use the share a memory tab on this webpage.

The family of Victoria Musson Bennett created this Life Tributes page to make it easy to share your memories.