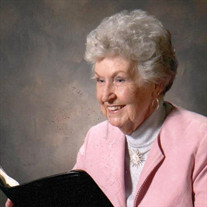 Virginia B. Taylor passed away on Monday, March 16, 2020 at age 95. Virginia was born in Detroit Michigan on July 27, 1924 to Wilson C. Barker and Pauline (nee Taylor). Virginia grew up on 18th Street in Southwest Detroit as the eldest of four children. She was predeceased by sister Joyce Kleehammer and is survived by brother Richard (Barbara) Barker of Wilmore Kentucky, and sister Julia Cheek, of Muncie, Indiana. After Graduation from Western High School, Virginia married Conwell “Connie” R. Taylor. They raised three children, Mark A. Taylor, Brian R. (Deborah) Taylor, and Holly L. (Brian) Good, in Mt. Clemens Michigan, before Connie’s death in 1986. Having been primarily a homemaker for her children’s early years, Virginia began working part - time in the early 1960’s at Sears Roebuck and Company. This part time work very quickly became a full time, 25 year career with Sears. Ginny, as she was known there, worked her way up to the Executive Secretary to the Regional Manager in Troy and managed and mentored many young women through the years and made many enduring friendships. She LOVED her career and was held in high regard for her professionalism, willingness to mentor young women and navigating the “working world” before that was usual or in some circles, accepted. Several years after the death of her husband, Ginny retired and in short order fulfilled a long held dream of designing a home. She studied houses deciding which features she liked and what she would do to change them to suit her life. Finally, she drew the interior spaces of a 2300 sq ft home on graph paper to scale, then took it to an architect and had him do the elevations for the exterior. She sought out a builder and a lot, finally had the home built in New Baltimore MI. Ginny lived in that home for over 20 years and enjoyed entertaining, decorating and spending time with family there, until health concerns at age 92 caused the need to leave it to move nearer her daughter. Along with her work and her home, Virginia’s children, grandchildren and GREAT grandchildren gave her many cherished memories and experiences. Cooking for and spending time with eldest son Mark and attending functions with him at his Huron Pointe Sportsman’s Club, traveling with son Brian and his wife Deborah to Alaska, Scotland, Ireland and Wales to name a few places and “Shopping until she dropped” with her daughter Holly, were some of her most favorite things. Known as Gigi to Leslie Taylor, Brett and Michelle Taylor, Chelsea and Steve Jeannette and Brynn R Good. She is beloved by these Grandchildren and her 6 Great - Grandchildren Ceili R. Rinaldi, Evan R. Rinaldi, Jackson Taylor, Brian Taylor II and Emmett Taylor and Duke A. Jeannette. Mom typically had a good outlook and would often answer the question “how are you?” with a big smile and the words “If I was any better, I’d be arrested!” We miss her greatly, but know she is now living the promise eternal with the saints who have gone before her, dressed and coiffed to angelic perfection. And if I go and prepare a place for you, I will come back and take you to be with me that you also may be where I am. John 14; 3 NIV Virginia will have a Private Memorial Service to be held at First United Methodist Church of Plymouth, and Interment of cremains at Cadillac Memorial Gardens, East. Memorials may be made to St. Jude’s Children’s Hospital, 501 St. Jude PL, Memphis, TN 38105-9959, or First United Methodist Church of Plymouth, 45201 North Territorial Road, Plymouth, MI 48170. To share a memory, please use the Share a Memory tab on this web page.

Virginia B. Taylor passed away on Monday, March 16, 2020 at age 95. Virginia was born in Detroit Michigan on July 27, 1924 to Wilson C. Barker and Pauline (nee Taylor). Virginia grew up on 18th Street in Southwest Detroit as the eldest of four... View Obituary & Service Information

The family of Virginia B. Taylor created this Life Tributes page to make it easy to share your memories.

Send flowers to the Taylor family.