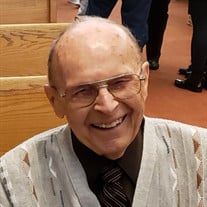 Walter Joseph Dubicki, age 95 of Livonia. Loving husband of the late Rose Marie who passed in 2021 shortly after their 72nd anniversary. Dear father of Louis (the late Teresa), Marie (the late John) Stafiej, Angela (Dan) Woods and Patrick (Kathy) Dubicki. Loving grandfather of Margaret (Michael II) Birt, Michael (Patti) Dubicki, Jason (Jennifer) Stafiej, Alicia (Kent) Riser, Megan (Matthew) Vasas, Rachel Woods, Sarah (Devon) Mitchell, Lori (Darrin) Balogh and Kristina (Dan) Chynoweth. Proud great-grandfather of Britni (Ian) Shaw, Michael (fiancé Lauren) Birt III, Charles Dubicki, Tyler, Jacob, and Adam Stafiej, Mackenzie, Mason and Max Vasas, Jacob and Alec Balogh, Jaden and Bentley Chynoweth and great-great grandfather to Gabriella Nicole Shaw. As a youth Walter was a member of Detroit Boys Club and Polish Falcons of America Nest 79, while attending St. Francis D’Assisi grade school and later as a member of Mic-Mac Athletic Club in Warrendale, helping young boys in sports. After attending St. Francis, he attended Chadsey High School in Detroit Walter was employed at Taystee Bread, a Division of American Bakeries Company, for over 40 years. He was originally hired as a Janitor in 1949 and worked his way up to Plant Superintendent 14 years later. The bakery hired many Polish displaced persons in the late 1950's and Walter became the interpreter and spokesman for company policies and for providing job training. He retired from the Bakery in 1989. A long-time member of Msgr. Hunt Council No. 3312, Knights of Columbus, in Dearborn Heights, 3rd & 4th Degree and member of the Honor Guard. He served as Grand Knight, Faithful Navigator and District Deputy. Walter was a delegate to the State Convention at Mackinac Island several years and had the honor to be selected as one of the State of Michigan Delegates to the 110th Knights of Columbus Supreme Convention held in New York City in 1992. He was a patron member of Polish Legion of American Veterans Post #16 in Dearborn Heights and was a member of the Post Honor Guard. In 1993 he was a recipient of the General Kazimierz Pulaski Award from the Polish-American Central Citizens Committee. Walter and Rose belonged to S.S. Peter & Paul Parish in Detroit for over 41 years where he was a member of the Holy Name Society. Upon moving to Livonia, they joined St. Damian’s parish in Westland and then most recently St. Sabina’s in Dearborn Heights. Visitation Thursday, January 27th 5-8 PM at Vermeulen-Sajewski Funeral Home, 46401 Ann Arbor Road West, (between Sheldon and Beck), Plymouth. In state Friday, January 28th 10:30 AM until the 11:00 AM Funeral Mass at St. Sabina Catholic Church, 25605 Ann Arbor Trail, Dearborn. Burial will take place at St. Hedwig Cemetery, Dearborn Heights. The family is looking forward to having a Celebration of Life for Walter and Rose with friends and family at a later date. Memorial contributions can be made to The American Heart Association/American Stroke Association, Midwest Affiliate, 3816 Paysphere Circle, Chicago, Illinois 60674. To share a memory, please use the Share a Memory tab on this web page.

The family of Walter J. Dubicki created this Life Tributes page to make it easy to share your memories.

Walter Joseph Dubicki, age 95 of Livonia. Loving husband of the...

Send flowers to the Dubicki family.